An Evening in Al-Ándalus

The music and songs of Jews, Muslims and Christians, who wove their fortunes and destinies on Iberian soil, in meetings and court festivities or alongside daily chores, were heard in houses and palaces as well as in streets, squares and souks, tell us about their festivities, their celebrations and rituals, their intimate feelings and also about historical events that took place at the end of old Europe. All this has passed, as a living testimony, from mouth to mouth, from soul to soul from the time they were created until the present day.

The concert 'An Evening in An-Andalus' showcases the sounds of medieval musical instruments from all over the Mediterranean area.

With this music and poetry, these songs and dances, men and women cemented their identity in the past, which is now that of men and women in the 21st century.

Mara Aranda has sung Turkish, Greek and Occitan songs, hymns, and the catalogues of folk singers and Sephardic Jews, transmitting a strong emotional charge and Mediterranean identity. Mara Andara, after more than 30 years of in the industry, is considered as one of the greatest ambassadors for the Sephardic and medieval culture, with numerous awards, honours, and national and international recognition throughout her time by specailised media. Her work highlights the figures of female composers of the Middle Ages, the ‘trobairitz’, which has been performed for the first time since being composed in the 11th-12th centuries, a musicalisation of the complete corpus. Her two most recent albums ‘Sefarad en el corazón de Marruecos’ (‘Sepharad in the heart of Morocco’) and ‘Sefarad en la corazón de Grecia’ (‘Sepharad in the heart of Greece’) won the award for ‘best álbum in Europe’ in the respective years of their release.

She is the director of the International Centre for Medieval Music-CIMM.

Jota Martínez, is a specialist in medieval plectrum and wheel instruments and is one of their most outstanding interpreters. His activity as a performer has led him to present this medieval and ancient Spanish music around the world, at some of the most prestigious festivals, since 1980.

His speciality in Arabic-Andalucian music has led to lectures and introductory workshops on Arabic and Middle Eastern music in different cities in Europe. He is currently the director of the Funún Arabic Orchestra and participates in various forms of music and dance of different styles.

With the support and collaboration of the Consulate General of Spain in Manchester, the University of Leeds and St. Ann's Church in Manchester. 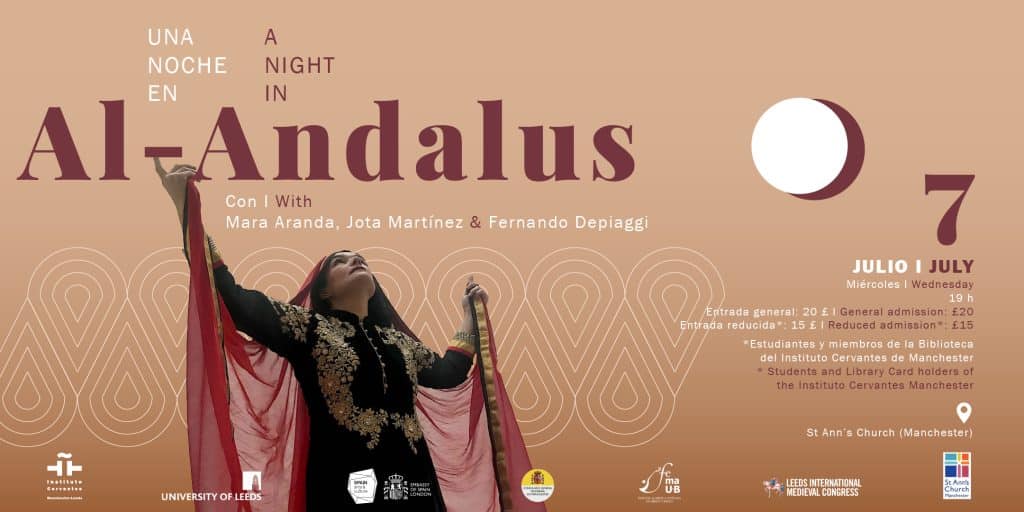