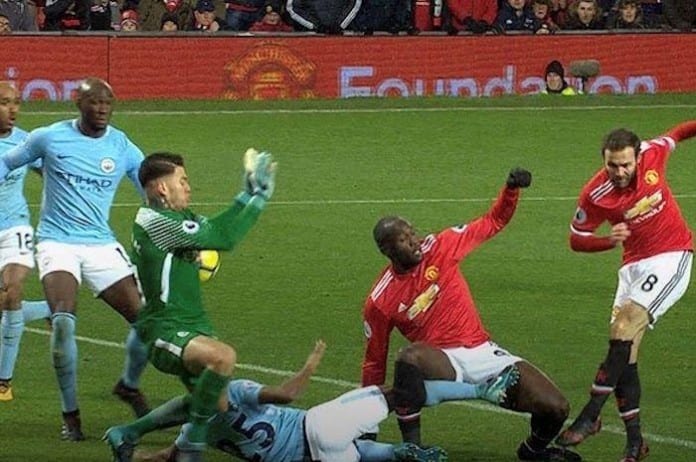 The result was inevitable really.

City have been in imperious form this season and United without Pogba were blunted, unable to apply the quick break to their game plan.

In truth Mourinho’s team looked scared. There’s unlikely to be any fear at the Etihad of this United team.

But we finally got we wanted. The touch-paper has been ignited and you can bet we’re no way near hearing the end of this one.

Ever since the two managers arrived in Manchester, the footballing world has been waiting for the rivalry to really kick off. Last season disappointed for both as they were outshone by Antonio Conte at Chelsea. Neither could flex their muscles on the pitch to warrant any real mind games off it.

This season is different. United are a better side than last season (remember they finished sixth) and City are undoubtedly a force to be reckoned with.

Mourinho may have conceded the title after Sunday’s defeat but that’s arguably the mind games just starting. Sitting 11 points behind, that’s really all he’s got at this stage. But to discount United’s chances is wrong and Mourinho knows this. Titles are not won before Christmas and City still have a lot of work to do.

Away from the result, we had bite, play acting, some scintillating possession football, mistakes, a goal from a Manchester lad, a wonder save, a fifth minute booking and plenty of dubious tackles.

This was a proper derby and the passion didn’t stop on the pitch, spilling out into the dressing rooms and tunnel.

According to reports, United – and Mourinho in particular – took issue with City’s over-the- top celebrations. It sounded like it really kicked off.

Apparently, punches were thrown, players from both sides were involved and City coach Mikel Arteta suffered a cut to his head.

While we would never condone violence, and footballers – and managers – are role models, it’s refreshing to hear how much this match meant to both sets of players.

We live in a time when footballers couldn’t be further away from the fans they represent every week. They earn more money in a year than we could hope to make in a lifetime, spend their days dancing on Instagram, endorsing the latest FIFA game, setting off fireworks inside and collecting cars.

They don’t care about the same things we do. But it turns out they really do.

There were no hugs, smiles between international team-mates or waving for Sky’s cameras.

Instead there were celebrations in front of the travelling support, melees around the referee and no love lost. And then a big fight in the tunnel.

If this wasn’t the best advert for English football, then I don’t know what is.

So where do we go from here? It might have taken 10 years for confirmation that it was Cesc Fabregas who threw pizza at Fergie in the infamous battle of the buffet, but we already know who the culprits were from Sunday’s skirmish in Stretford.

Apparently, it was Mourinho and City’s goalkeeper Ederson who started everything with a few choice words, and misfiring Romelu Lukaku was reportedly heavily involved.

Let’s hope he fights better than he defends.

Arteta was left injured, while Jose was covered in milk and water. We don’t know if Pep got his hands dirty, but I’d like to think he did.

The fallout has just started and the war has really begun in Manchester. You can’t take your eyes off this one.

We can’t wait for the next instalment.