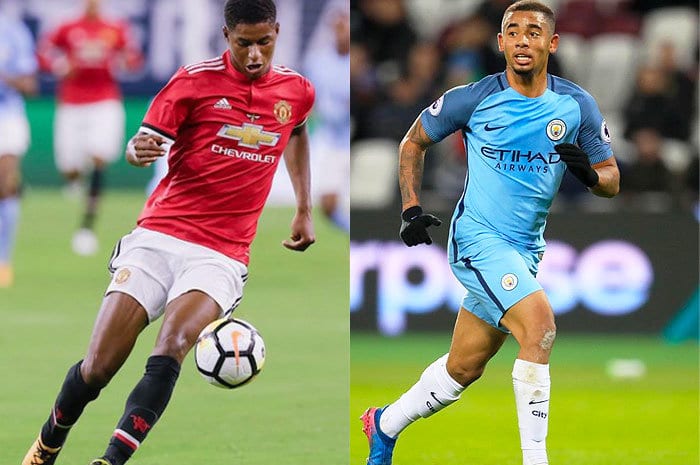 This is the one we’ve been waiting for. It’s the 175th Manchester derby on Sunday and it’s never felt more important. Finally, we’ve got the battle we wanted. It’s Jose and his team of giant pragmatists against Pep and his band of diminutive purists.

The media are revelling in this City side after their record equalling 13th Premier League win on the bounce. They’re being proclaimed as the best side to ever grace England’s top flight in the moneyed Premier League years, but now it’s the time to prove it. United are quietly (well as quiet as Mourinho can be) getting on with getting back to the summit of English football. A win for either team could be season defining.

We asked our United and City writers, United fan Jonny Swindlehurst and City fan Mikey Richardson, to look at the opposition and pick out their key men.

City by a United fan

Nicolas Otamendi has been in top form this season and is the one constant at centre half for the second-best defence in the Premier League, missing only one league game all season. The Argentine has also scored three league goals – two more than United’s Juan Mata.

With John Stones out and Vincent Kompany likely to start but again struggling for fitness, Otamendi has provided the needed stability at the back for Guardiola’s side.

It will be down to him to marshal Romelu Lukaku on Sunday and keep the £75million striker at bay. For City, a huge responsibility rests on his shoulders.

Most people hate Raheem Sterling, apart from the blue half of Manchester. And if he wasn’t so disliked in his home country, he’d likely be getting a bit more praise for his performances this season.

Not only has he scored nine goals in the league, he’s also won his team a total of nine points – the last gasp winners against Huddersfield and Southampton were particularly vital going into the busy Christmas period. Lukaku for example has scored eight but only won United three points.

If the game’s tight at the death, Sterling could once again be the man to change things. United beware.

Sergio Aguero always scores in the derby. United’s back four might have eyes elsewhere trying to contain Sterling, Leroy Sane and Gabriel Jesus (not to mention David Silva if he’s fit) but, with seven goals in Manchester derbies, they’ll ignore Aguero at their peril. If he scores, you have a feeling City will win.

United by a City fan

Jose Mourinho has come under some criticism in recent weeks for his tactical approach. The fact remains that United have got the required results. City may very well be in good form, but they have relied on last minute winners in their last few games. On Sunday they come up against potentially the best keeper in the world.

David De Gea proved against Arsenal just why Sir Alex Ferguson took a chance on him as a teenager. He was outstanding. World class.

United have always had great goal keepers but De Gea may well be the best one yet.  Quite often the topic of conversation in the pub is just how many points he saves the Reds every season. Quite honestly, he is irreplaceable.

His skills will surely be required on Sunday, but the rest of the team will need to make sure they take advantage and get the result to reduce the 8-point deficit.

Attack-wise Mourinho has a big decision to make with Zlatan Ibrahimović back to fitness ahead of Sunday’s game. Lukaku has struggled with his goal scoring in recent weeks only scoring twice in his last twelve appearances.

Ibrahimović is a proven goal scorer and offers the big game impact. He scored a spectacular volley against the Blues the last time they visited Old Trafford and is more than capable of repeating that.

Then there is Marcus Rashford. The 20-year-old has not only won over the fans but also Sir Alex Ferguson. Fergie was renowned for giving youngsters a chance. Think Class of ’92.

Rashford is Manchester born and bred and will know all too well the pressure and pride that comes with a Manchester derby. He is a genuine goal threat and can cause City’s back line some real issues – if Mourinho sets up with attack in mind.

Too often this season we have seen the Mourinho way of trying to stifle the opposition and get a 1-0 win. Last season that was OK based on the previous regimes of Van Gaal and Moyes.  United fans are used to watching exciting, attacking football which is something Mourinho does not bring and nothing but a victory on Sunday will be deemed good enough.

What’s your prediction for the big game?