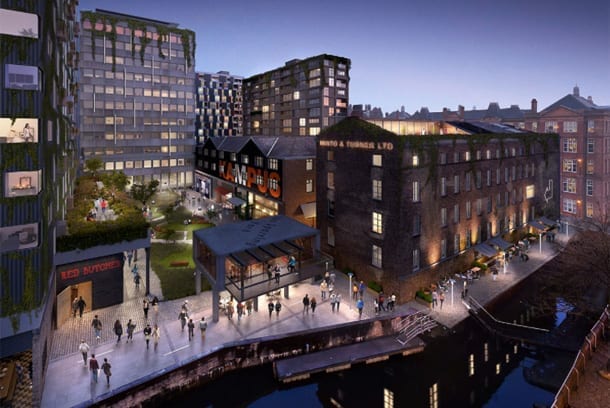 Manchester is at the start of another surge of economic and population growth and the next step in the transformation of the city centre will be the redevelopment of one of the most neglected parts of Manchester city centre.

Plans have been submitted to Manchester City Council for the redevelopment of an area between Piccadilly Station and Canal Street into Kampus, a mixed use canalside development. An area of approximately 450,000sq ft comprising MMU’s vacated Aytoun Street Campus and the Euro Car Park surface car park, bounded by Auburn Street, Aytoun Street, Whitworth Street, Chorlton Street, and the Rochdale Canal. will provide up to 500 new homes, some with rooftop gardens, and two hotels together with shops, bars and restaurants. London Road Fire Station would be redeveloped as a mixed use leisure and hotel destination.

According to the plans, the development will ‘transform the environment and appearance of this important gateway with buildings of distinct architectural quality’ to create a new ‘hip, vibrant and creative’ district which will make ‘a substantial contribution to the local economy.’