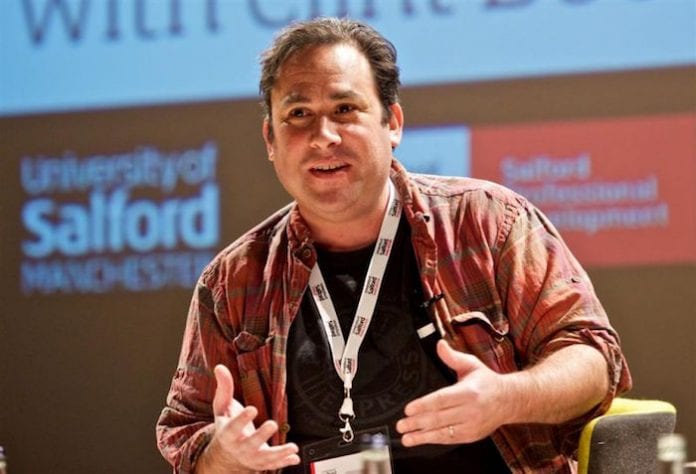 You may not have heard of Josh Weinstein, but you’re probably familiar with his work. That’s because he’s the man who wrote some of the best episodes of the world’s favourite TV programme, The Simpsons. We put some questions to him when he was in town for the recent Salford International Media Festival.

“…what I love most about Manchester, and this sounds corny but it’s true, is the people”

You’re a patron of the Salford International Media Festival. How did you first get involved?

It came about from my working on the CBBC programme Strange HillHigh at MediaCity. I think when they heard there was this Simpsons guy here, they wanted to know if I’d be interested in giving some talks at the festival as well as talking to the students at the University. I was thrilled to do so as any time I can share my experiences – and talk Simpsons trivia – with people, especially young people interested in going into animation and entertainment, I’m very happy to.

You are on record as saying you are obsessed with Manchester and that it’s your favourite city in the world. Apart from the weather, what is it you love most about Manchester?

I love the weather! It’s nice to have weather. In LA, it’s one steady temperature pretty much all year round, except when it gets oppressively hot. So Manchester weather is exciting to me.

I remember one day I was walking down the street in Altrincham and it started sleeting – horizontally – and I couldn’t have been happier.

But really, what I love most about Manchester, and this sounds corny but it’s true, is the people. The friendliest and funniest people I’ve ever met. Anywhere. And I think the way people are here lends itself to tremendous creativity. There is no more creative place on earth.

And Manchester has such a great history of creativity. Some of the world’s best poets, writers, artists and musicians come from here. My favorite poet ever is Dr John Cooper Clarke (with Lemn Sissay a very close second.) And these are people I came to independently. It always just ends up they’re from Manchester! Same with my favourite music groups. I once made a list of my 10 favourite groups and five of them were from Manchester – Joy Division/New Order, James, Stone Roses, Inspiral Carpets and The Smiths). So there is a spirit of creativity here like no other place on earth.

What is it that makes Manchester creative?

It’s the spirit of the people and I also think it’s because Manchester is so awesomely independent. It takes its cues from no one. And it’s never afraid of trying, making or doing something new. And it’s also got one of the best collective senses of humour I’ve ever seen in a place. Way too many places take themselves far too seriously.

A couple of years ago you said Manchester has the potential to eclipse Los Angeles as a worldwide hub for the media industries. What needs to happen for this to become a reality?

It’s already happening. Manchester already was the home of great creativity. Not just in media industries but in the arts. And for me personally, in animation, Manchester was already the historic home of great, innovative British animation. And now I think we’re seeing animation really booming here. More and more people are recognizing how great Manchester is for anything creative and I think it’s just a matter of time.

How often do you come to Manchester?

Not enough! I’d live here if I could and I hope someday that will actually happen.

I just went to the People’s Museum yesterday. What a great, unusual museum. I really doubt that any other city on earth would have a museum like this. I also like just walking around. You never know what interesting thing you’ll see. There’s so much history here. Whether it’s the old mills and railway bridges or just the buildings that have so much history with them, it’s a thrill to me. It’s very sad that some of the Joy Division places like TJ Davidson’s rehearsal studio aren’t around anymore, though. I also really like the Northern Quarter. That’s where I’m headed now!

Thanks for the love, Josh. The feelings are entirely mutual.