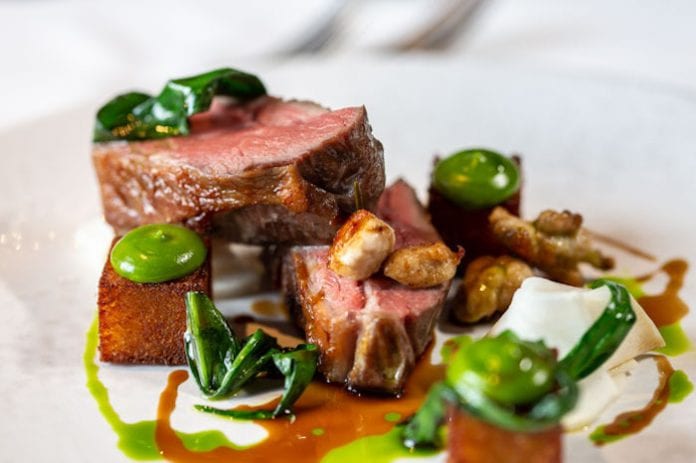 Is it possible to be won over at a restaurant just by the bread? When it arrives fluffy and chewy and warm, served with loads of butter, extra salt, and a bowl of hot hearty beef dripping to dip, the answer is yes.

We all know Yorkshireman James Martin loves butter and dripping, so it’s no surprise this pre-dinner snack is flawless.

James started his culinary career in London under the guidance of chefs including Antony Worrall Thompson and Marco Pierre White, and travelled around France working in chateaux kitchens and gaining experience in Michelin star establishments. He became a head chef before his 22nd birthday. 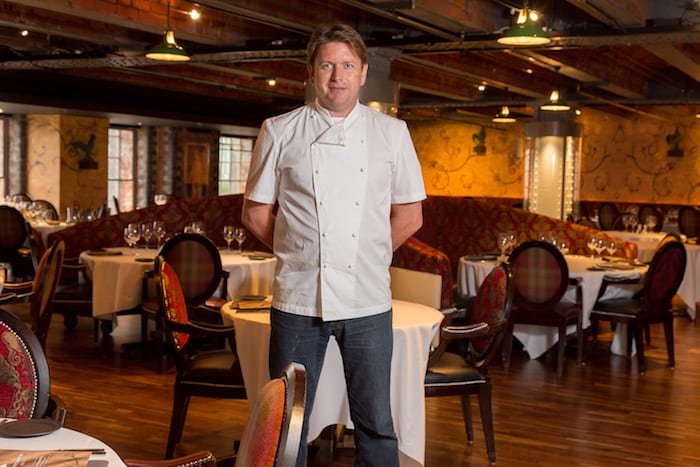 In 2013 his restaurant James Martin Manchester opened in the Manchester235 casino at the Great Northern Warehouse. Providing modern British cuisine in industrial chic surroundings, it gained positive reviews and was listed in The Sunday Times top 100 UK Restaurants for 2015.

Does it still deserve the praise a few years on? We went to try the new menu to find out. 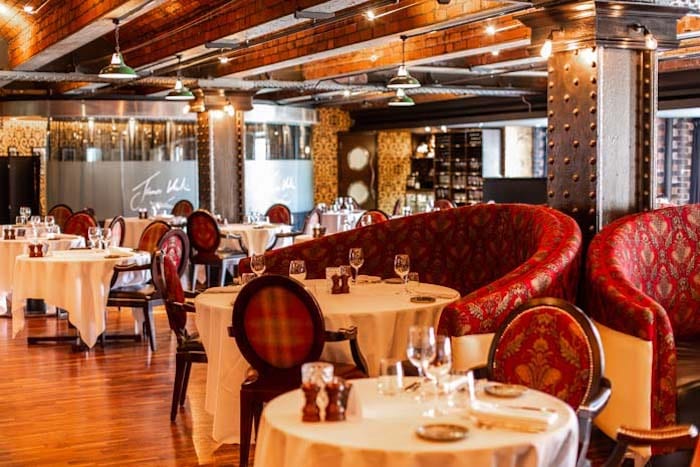 And the spring menu showcases all the best-loved ingredients of the season – think tender lamb, wild garlic, the tiniest Jersey Royals and the first of the season asparagus.

It’s that asparagus that appears on the first dish of the new tasting menu, and it’s a timely reminder of why we get so excited about this exquisite vegetable’s short-lived season. 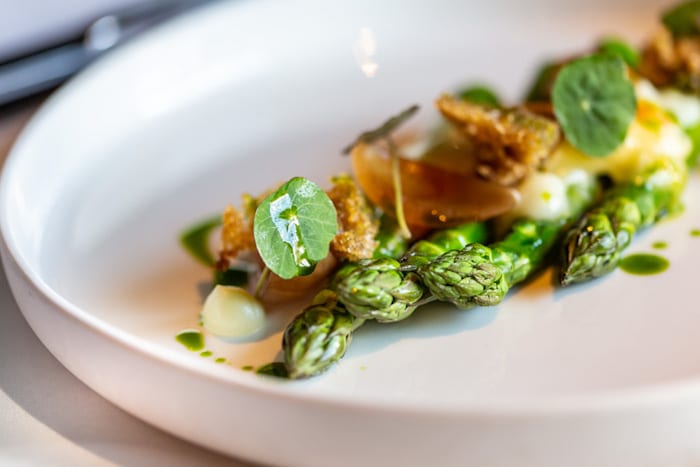 The vivid-green Wye Valley spears are served with creamy melted Baron Bigord cheese, which is like an English Brie, alongside pickled pink Roscoff onion, spicy nasturtium, aromatic dill oil and crunchy malt crumbs that have been through the fryer.

Next up is XO mackerel served with smoked crunchy gem lettuce. It’s an unashamedly robust, rich combination, the smoky flavours from the Josper grill enhanced by coal oil. There’s a touch of lightness, though, thanks to chunks of sharp pomelo, similar to grapefruit in taste and texture, and citrussy Japanese ponzu sauce with a tactful tartness. 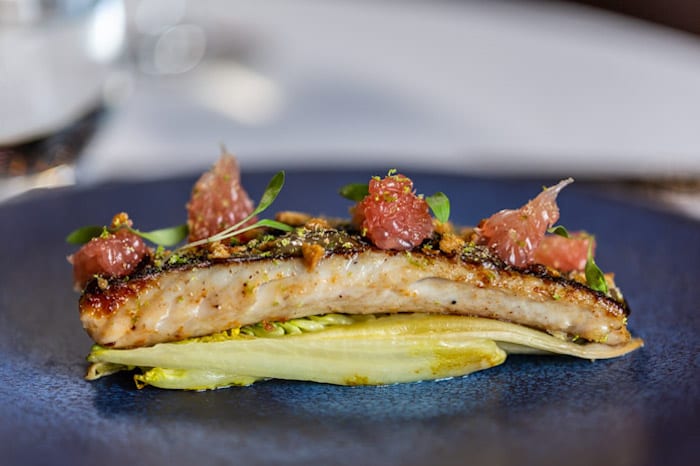 Slow cooked eggs are often a disappointment – all that time luxuriating in a water bath and still unappealingly wobbly and translucent. But not here. This one, with its rich golden yolk just begging to ooze into the princely potatoes, is masterful. 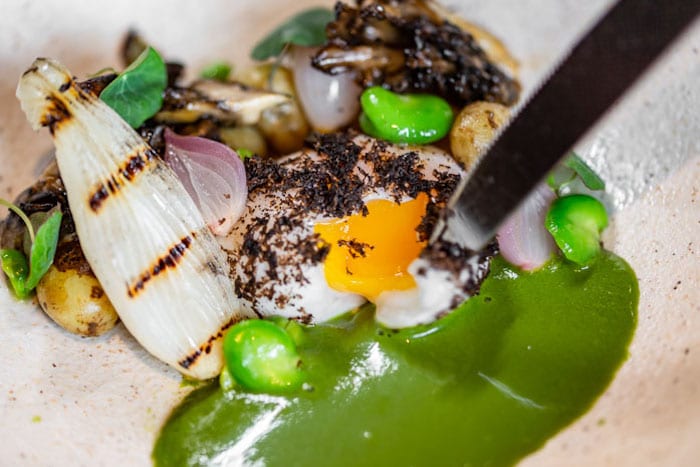 Firm white halibut, woody artichoke and ale puree, haricot beans and kale feels like a light, healthy dish. The lamb rump that follows, not so much. But by god it’s delicious.

It’s a celebration of Herdwick lamb, the breed native to the Lake District, and it’s good to see different parts used with aplomb. The plump pink rump comes with rosti potatoes cooked in the lamb fat, with creamy lamb sweetbreads punctuating the plate.

Wild garlic and ribbons of fermented turnip cut through the fattiness admirably. 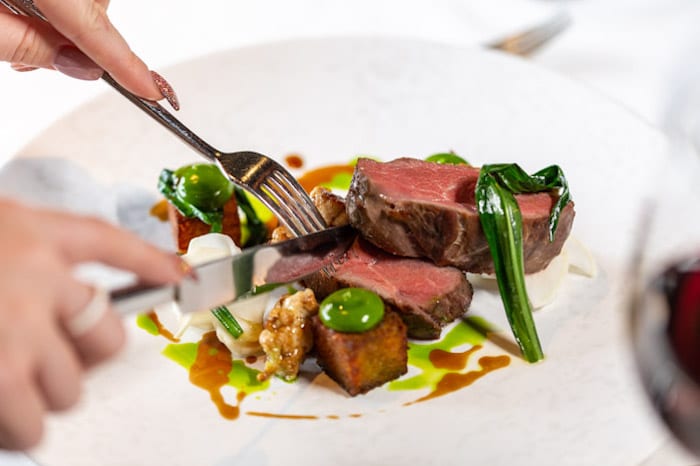 There are two desserts on the tasting menu, because why do things by halves?

First, a celebration of rhubarb, which also doesn’t do things by halves. It appears in various guises – as a sorbet, a gel, dehydrated and as a poaching liqueur – a showy ode  demonstrating the sheer skill coming out of this kitchen. 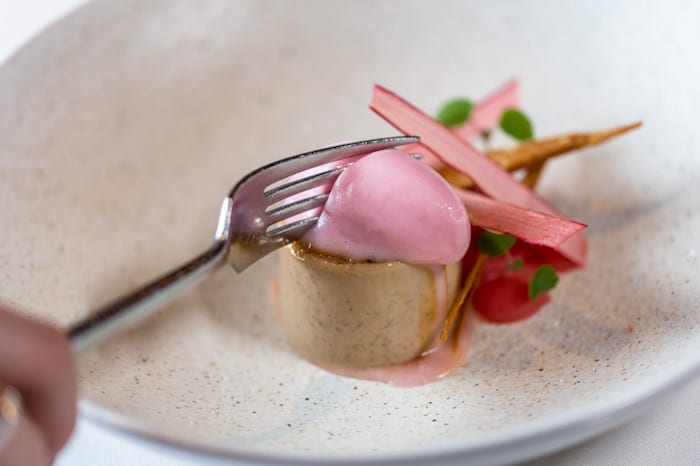 It’s not even the star – that’s arguably the fragrant lemon myrtle brulee – but it’s close. There’s also toasted brown sugar meringue and caramlised puff pastry to dial up the sweetness.

And then, finally comes a banoffee souffle, proudly risen but light as a feather, with intensely flavoured roast banana ice cream and a sticky, grin-inducingly sweet caramelised white chocolate sauce. 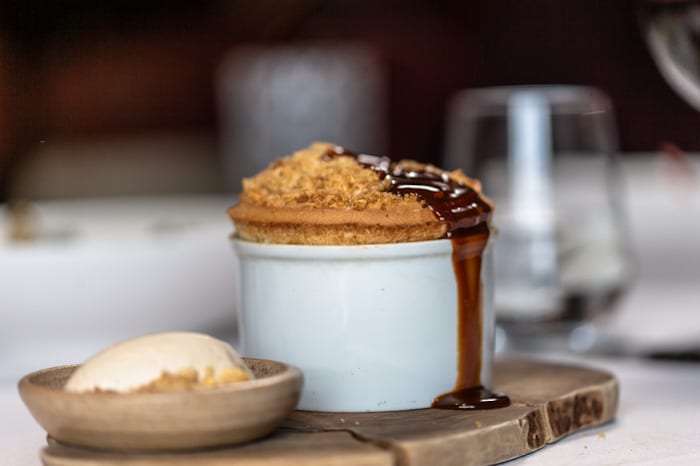 James himself may not be in the kitchen every day, but he doesn’t need to be when the chefs can produce a succession of plates like this.

In short, this menu is a triumph.