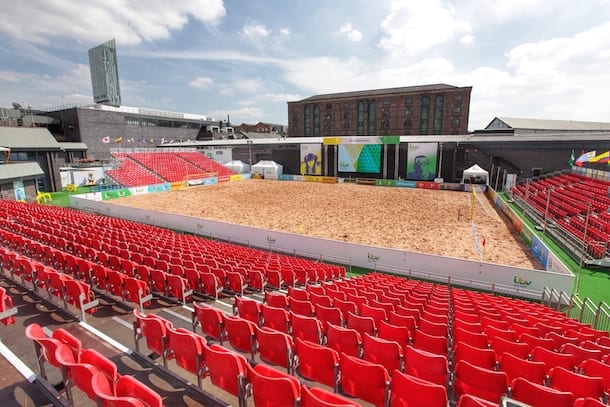 ITV’s World Cup Fan Park in Manchester, ITV Fever Pitch, is gearing up for the final days of the tournament.

Fans and families have the opportunity to immerse themselves in the emotional roller coaster of the biggest football event in the world during the much-anticipated semi-final and final matches.

Games are being screened live every match day throughout the 2014 World Cup at the event, called ITV Fever Pitch, which is situated at the Old Granada Studios site in Manchester. Fans can apply for free tickets at itv.com/feverpitch.

450 tonnes of sand was brought in to create a Brazilian-style beach soccer stadium at the heart of the fan park, with the games broadcast live on the arena’s giant 40 square metre screen.

During the group stages, the arena played host to beach soccer matches before the live action from Brazil, organised by Beach Soccer Worldwide, with fans being able to watch England’s beach soccer team take on some of the best players in the world from Italy, Uruguay, Costa Rica and Germany.

On the weekend of 12 and 13 July the England Beach Soccer team will be returning to the stadium.

ITV has been using the World Cup to inspire youngsters to get active and take part in sport by running a morning community programme at the fan park, before it opens to the public, in partnership with Join In. Schools and sports clubs from the North West have been given the opportunity to come down and have a go at beach football, with coaching provided by professional players. This programme is part of a wider partnership between ITV and Join In, to raise awareness and encourage more volunteers into local sport.

In addition to the beach soccer stadium, there are areas around the site where fans and families can soak up the spirit of Brazil and excitement of the World Cup. The ‘Little Copacabana’ beach area of the park offers them the chance to enjoy the atmosphere and relax before the big game. The High Tempo zone offers visitors a chance to work up a sweat and demonstrate their own football skills, and there is also a range of Brazilian themed food and drink on offer.

Fans can apply for free tickets at itv.com/feverpitch