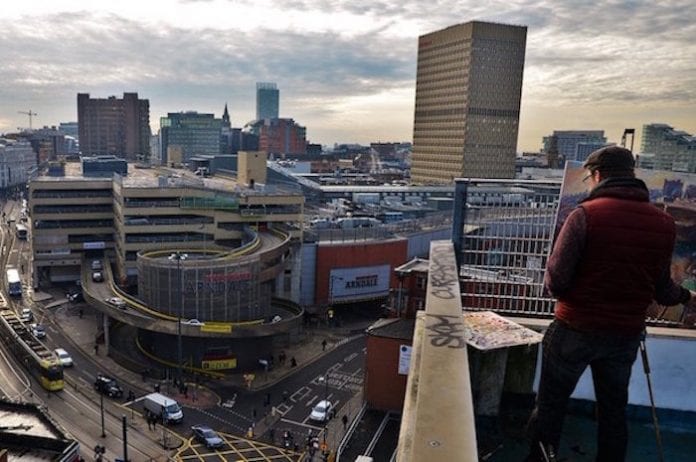 That’s the question posed by journalist and blogger Alec Herron in a feature carried in The Guardian recently. Brows are furrowed and hands are wrung as bit by bit the soul of the city is being eaten away – or so it’s claimed.

Herron’s doom-laden conclusion goes thus: “With the greatest growth the city has seen since the Industrial Revolution lying ahead, the prospect of Manchester taking an irreversible step too far in the destruction of its heritage is only a few wrecking-ball swings away.” Hmm.

Leaving aside the question as to whether industrial Manchester ever had a soul in the first place – it seems to me the mills, the forges, the pits and the rag-trade sweatshops must have been pretty soulless places – it’s worth reminding ourselves that the heritage business is a relatively new phenomenon. Listing buildings didn’t start until it was realised, post World War II, that some of the stuff the Luftwaffe hadn’t already flattened might be worth keeping.

I remember being with my late father in St Peter’s Square back in the mid-1950s. He told me he’d been in the crowd watching King George V open the Central Library and laying the foundation stone for the town hall extension in 1934. Then he pointed to The Midland Hotel, its terracotta facade then soot black, and said : “That’s the ugliest building I’ve ever seen”.

His distaste for Victoriana (although The Midland was not opened until the old Queen had been dead for two years) was commonplace in an age of austerity-tempered modernism. After all, had not the Manchester Plan of 1945 envisaged an almost total purge of the city’s 19th century buildings (no one called it heritage then) including the demolition of the town hall?

We thank our lucky stars that in the immediate aftermath of the war – and for some years afterwards – the city was too broke to engage in such grandiose schemes. Until the late 1960s, little of the bomb-damaged city centre had been rebuilt apart from the Free Trade Hall, of which not much more than the Peter Street facade had been left after a German incendiary attack in December 1940.

But then the Victorians themselves showed scant respect for their predecessors’ endeavours and all but obliterated pre-19th century Manchester. St Ann’s survived, as did the Shambles and Chetham’s Library. Much of the cathedral, including the tower and the nave, was remodelled, probably on the grounds that they thought that their romantic imagining of the Middle Ages was better than the real thing.

Given relatively recent attitudes then, contemporary concern for heritage has preserved much more of the past than Victorians might ever have expected. Manchester, a commercial city centre rather than an industrial one by the mid-19th century, has kept much of its character through the refurbishment and re-use of its ubiquitous textile warehouses.

Joshua Hoyle’s warehouse became the Malmaison Hotel, Sparrow & Hardwick’s is now Abode and S & J Watt’s magnificent building in Portland Street is the Britannia Hotel. There are many, many more examples.

Other industrial buildings across the city from Castlefield to the mill complex of Ancoats’ World Heritage Site have been preserved for residential or commercial use. This is far from insignificant. Indeed, it is remarkable and a country mile away from the proverbial last few swings of a wrecking ball.

Much of Herron’s concern actually centres on the fate of a handful of old pubs – the Black Horse in Chapel Street, doomed to make way for 400 apartments; the Smith’s Arms in Ancoats, feared to be facing a similar fate; the Star and Garter music venue near Mayfield; the Salisbury near Oxford Road station and the Abercromby in Bootle Street.

Let me concentrate on the ‘Abers.’  Before the Manchester Evening News abandoned the city centre for Hollinwood, it was the favoured watering hole of journalists – and the detectives from next door’s police HQ. The pub is said to have been the place where Peterloo victims were given medical help after the ‘massacre’ in 1819, but my memories are different. During the World Cup of 2002 in Japan-South Korea, I would get to the pub at 7am, sup a pint of Guinness while watching the first half then nip across Deansgate to the office, write the editorial leader column and be back in the Abers for a second pint mid-way though the second half.

Happy days – but long gone. In the years that followed, most of the Abercromby’s clientele vanished. Then it closed. I suspect other pubs on the list have not been overly busy for some time either, and time moves on. I wonder how many signatories of the ‘save the Abercromby’ online petition were regulars there.

And sad to say but these days, Manchester’s overwhelming preference is for a bar culture, not for traditional back street boozers. Moreover, drinking at lunchtime is now regarded as infra dig. Towards the end, even journos like me were being leaned on for taking a daytime libation. Now hapless hacks are lucky to leave their work stations at all.

People change. So do the cities they live in.