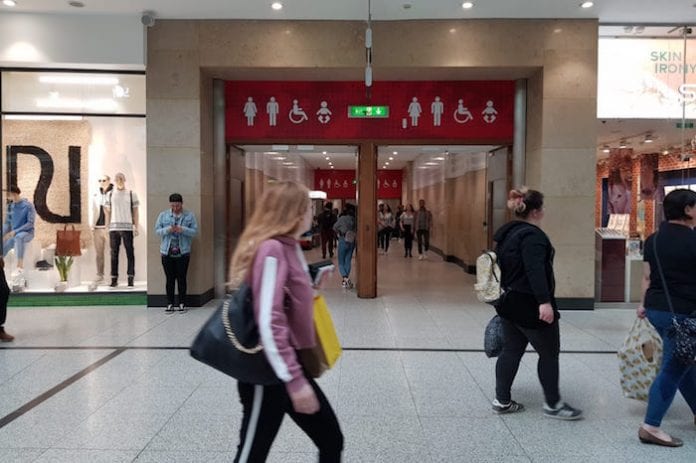 And then there was one. Just one.

The only council-run public toilet in Manchester city centre is in the town hall extension. How convenient. Especially for the council.

At least it’s a “changing place” offering provision for people with disabilities and baby changing.

There’s another changing place/toilet in Central Library, which may or may not count as “public” – but in any case it’s located just next door to the town hall extension. And that’s it.

The death knell for the great British public loo may not be confined to Manchester, but the city’s closure programme has been more rigorous than many other councils’ right across the nation.

But at least there’s one left. There are a lot of places with none.

According to the British Toilet Association (BTA) the number of public loos has fallen from almost 4,000 at the turn of the millennium to below 2,500.

Why the cull? Town halls resort to that familiar mantra: it’s the cuts. The Local Government Association says councils are doing everything they can to keep public toilets open and ensure there is provision for people with particular needs.

It’s as if they believe that by saving the public from spending their pennies, the tens of thousands of pounds that make up the salaries and pension pots of top council officers – often much more lucrative than the Prime Minister’s – will look after themselves.

To help fill the gaps left by the collapse of council provision, the BTA has launched a Use Our Loos campaign urging cafes, restaurants, pubs and shops to open up their toilets for non-customers to use.

“We know councils are under immense pressure with their budgets and despite having no legal obligation to maintain these public facilities they have continued to try to halt the rapid rate of decline,” said Raymond Martin, director of the BTA.

“Use Our Loos is a community-oriented solution, not about opening more public toilets but making more toilets public that already exist.”

Each participating outlet will be encouraged to have a sticker on display so the public can easily spot a business happy for people to use its toilets without necessarily being a customer.

The BTA’s national campaign echoes the City Loos scheme backed by Manchester city council and business services team Cityco which was launched with much fanfare in 2010.

Manchester’s shoppers were urged to look for large magenta sign which read ‘You are welcome to use our facilities’ to know they were ok to go inside and spend a penny.

The scheme came about after the council received a large number of complaints about the lack of public conveniences in the city.

City centre boss Pat Karney predicted that the scheme would provide around 100 toilets all over the city centre, helping to meet concerns that the lack of public loos prevented older people from going to town shopping leading to shrinking social involvement and increased isolation.

However, according to the council website, there are currently public conveniences in nine locations in Manchester city centre as part of the City Loos scheme.

But there’s another problem – rapidly growing numbers of rough sleepers. Numbers across Greater Manchester increased by more than 40 per cent between 2016 and 2017 to 278 – though some agencies claim the real number is twice that – and most doss down on city centre streets. Was the faltering of the City Loos scheme merely co-incidental?

The issue recently came to a head in the Northern Quarter when several businesses took to twitter to complain about “all time lows here on Church Street and Birchin Lane!”

ALL TIME LOWS HERE ON Church Street and Birchin Lane!

WHY ARE WE HAVING TO CLEAN HUMAN EXCREMENT UP BEFORE WE OPEN OUR BUSINESS’ FOR THE DAY.

Every open doorway on Birchin full of human SHIT.

The disgust was echoed by complaints about similar issues in Cathedral Gardens, Oldham Street and Ancoats.

2/2
Our neighbourhoods team are available Mon-Fri 9am-6pm to assist in reporting street cleansing.
They can also be reached via email. contact@manchester.gov.uk

If you wish to make a formal complaint or suggestion please use the following link.https://t.co/NKKBxyk5xF

More than a week ago, I asked the town hall several specific questions. Would the council increase public toilet provision? Would they, in the light of the new BTA campaign, revive the City Loos scheme and what provision was there for rough sleepers? Not necessarily for the benefit of the rough sleepers (which might encourage more to come) but for the people who have to endure the consequences of no provision.

So far the council has failed to respond.