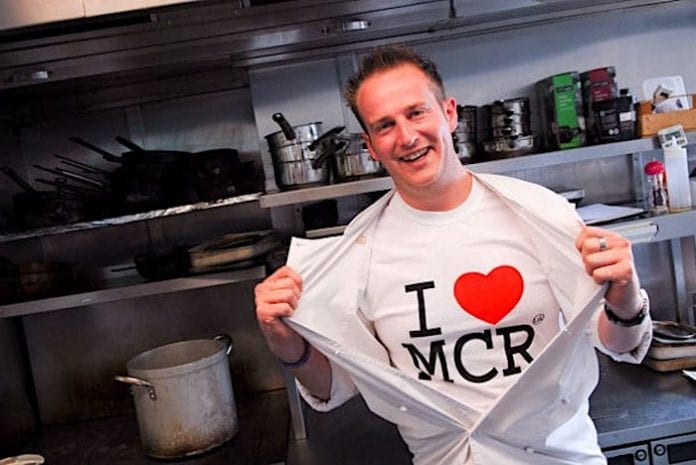 Grenache is an atmospheric, hidden gem in Walkden, Gtr Manchester. Owner ‘a man named Huss’ is a hands-on over-familiar character and the reputation of any restaurant can only be spawned from the kitchen. Head chef Mike Jennings is without a doubt one of the finest chefs in not just Manchester but the North.

…twelve months ago we had just started to try and put ourselves on the map.

Putting aside some precious time out of his busy schedule and considering his nomination for Chef of the Year at the upcoming Manchester Food and Drink Awards, we managed to grab a few with Mike.

How does it feel to be nominated for Best Chef in the Manchester Food & Drink Awards?

“It’s an amazing feeling to think that twelve months ago we had just started to try and put ourselves on the map. I think it’s a surprise, an honour and very humbling.” 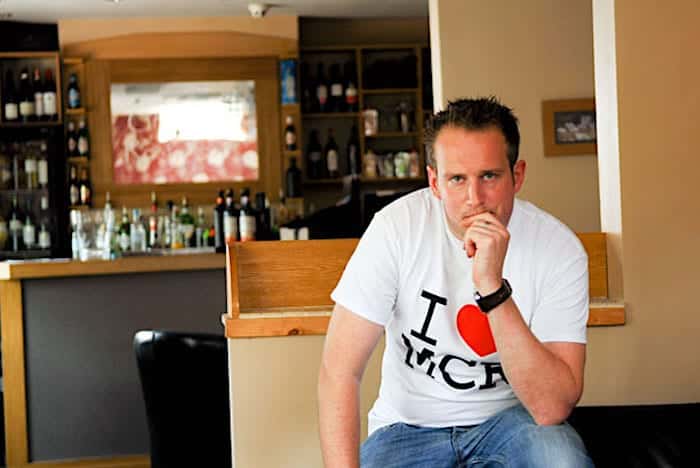 Tell us how you got into the industry, Mike?

“I hated school; didn’t do well in my GCSE’s, and my careers advisor suggested to go to catering college, so I did. I worked at a pub part time peeling carrots but started enjoying it: I’d go home after spending all day creating in the kitchen. It’s so rewarding taking an empty plate and by the time I’ve finished I’ve created a picture on a white space. I look at it how an artist would: it’s my creative side coming out.

“Then I went on a mission that sent me to college for four years. When I left college at twenty, I went to Jersey for 7 years working for Sean. At the age of twenty seven I was still a Sous Chef and I decided I needed a change, so I left and went to Northcote Manor under Nigal Howarth. I then decided I wanted to run my own kitchen and moved to Dorset for a year to work with Gary Rhodes, which was incredible. He was so articulate and inspiring, and his attention to detail was frighteningly good. Working from 7am to 3am each day, you knew the routine: all day, every day.

…free reign of the kitchen and raise my profile as well as the restaurants.

“In the end, it was Manchester city centre where I ended up and I was at Southern Eleven for 6 months. I wasn’t really enjoying myself there as I felt as if I were becoming a pulled pork factory worker, and so I started to ring around and that’s when I found Huss and Grenache.” 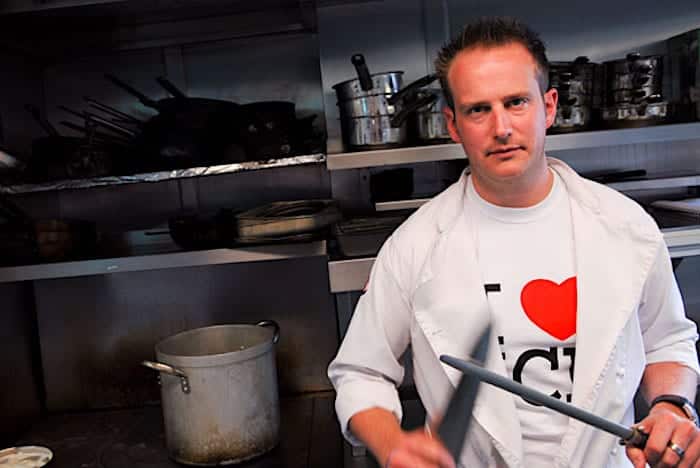 You are the head chef at Grenache Restaurant, what made you want to work there?

“Through meeting the owner Huss and the manager Lindsay just over a year ago. They wanted a chef who could raise the bar and standard of food, and once that was done, push us forward for Michelin. It allowed me to have free reign of the kitchen and raise my profile as well as the restaurants’.”

As Grenache is a small independent restaurant, how does it compete with its bigger rivals in the city centre and how do you help to promote it?

“I think that because we are an independent restaurant we have more to prove because we have our local customers to impress and we need to produce good food and good service to keep up with our big competitors. 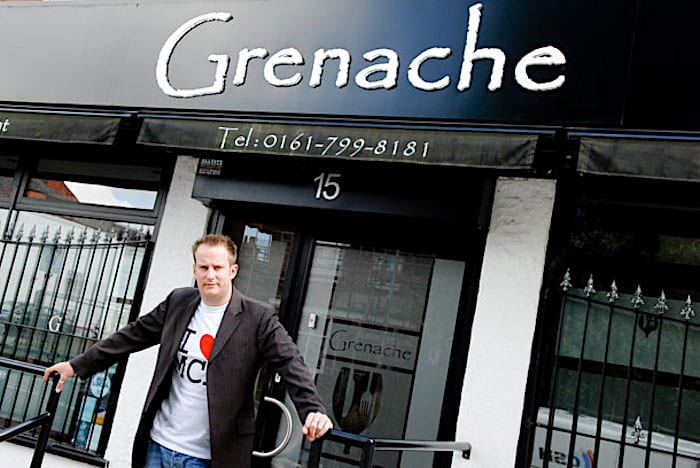 “We use social media (@mikechef11 or @grenacherest) massively because we don’t have the budget to spare for advertising and big campaigns. We like to give our customers as many promotions as possible such as “two for one if you quote this tweet”. We find that people will travel for good food.”

…there are a large number of chefs in Manchester that are pushing the boundaries and standards.

What is your opinion of the food & drink offerings in and around Manchester at the moment?

“I think the Manchester fine food scene has been portrayed quite badly by the critics in London, but I think that there are a large number of chefs in Manchester that are pushing the boundaries and standards. There are a lot more characters coming through now who are pushing for independence and moving away from the big chains.”

What’s the most unusual thing you have ever prepared and cooked for someone?

“Unusual for the general public was when I skinned a deer and took the parts out. There has also been lambs testicles, and a 10 foot eel, but the deer was the most interesting because I had to follow and use my skills carefully in order to treat the product with the respect that it deserves: keeping it simple, keeping it clean, and using the skills that many chefs don’t get to use in practice.

…they had pick ‘n’ mix bugs on a market and the guy behind the stall said ‘you just eat the juice inside.

“The strangest thing I’ve eaten was when I went to Thailand: they had pick ‘n’ mix bugs on a market and the guy behind the stall said ‘you just eat the juice inside’. He cracked off the bottom and ate it, then got me one. and it was incredible, it tasted of mango juice.”

What support have you had from the owner and manageress in Grenache around your desire for further success?

“They have done nothing but support me and promote me, so in regards to the award it is a massive achievement. Just being nominated is massive and is not something I was expecting.”

Who is the most famous person you have cooked for and what did you prepare?

“I cooked for Geoff Hurst when I was at Gary Rhode’s. He turned up for dinner out of the blue and came into the kitchen to say hello to all the boys. he just had a fillet steak, really simple.”

Where do you get your inspiration and ideas from, to build the weekly changing menu that Grenache offers?

“My inspiration comes from whatever is in season more than anything. We have a great relationship with our suppliers.” 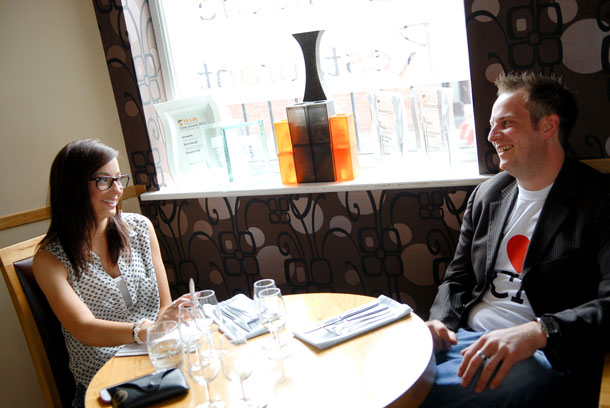 What is the funniest thing you have ever seen happen in a kitchen?

“There are lots of practical jokes in the kitchen, you’ll take the most innocent looking kids and wind them up. One in there now has attempted the cinnamon challenge (where a spoonful of cinnamon is consumed at once) and smelled pepper: it’s all part of the initiation. I’ve seen people covered in treacle, feathers and flour and having to walk home that way. When I worked in Jersey we got a lot of turbot. One day it came fresh in a polystyrene box, and when we were cleaning the fish it flipped back to life. We were all in so much shock that a dead gutted fish had just been wriggling around the kitchen!”

Mike Jennings has been nominated for Chef of the Year at the Manchester Food And Drink Festival Awards.