Queen of Burlesque Dita Von Teese returns to the UK this spring with her all-new Glamonatrix revue and due to demand, extra dates have been added, including a second night in Manchester.

“I’ve been to Manchester a few times over the years. I really like it,” says Dita, 47, who will perform at Manchester’s 02 Apollo in April.

“I have to say the audiences are especially rowdy, which I quite enjoy. You notice it. It’s always fun to step out of London and see other parts of the UK.”

Dita’s last visit to the city was for the opening night of the late-night cabaret club Whiskey Down back in July, where she was flown in to provide extra dazzle to proceedings.

But that was just a taster of what’s in store for those watching the uber-glamorous Glamonatrix.

As Von Teese has evolved, so have her shows, and today it’s a mixture of comedy and striptease, as well as a celebration of diversity, including men and women, in a body-positive way.

The aim, she says, is to inspire and uplift, which is why the audiences are predominantly made up of women and the LGBTQ community.

“I feel so fortunate that burlesque has come to symbolise a celebration of beauty and sensuality in many forms, a place where unlikely icons take the stage and inspire others.

“I’m proud to be a part of the modern burlesque movement and I’m grateful to have the chance to tour with performers that change people’s minds about striptease,” says Dita, who started out as a Playboy model in the Nineties and has been central to the fruition of Neo-Burlesque.

As part of the Glamonatrix show, there are four main acts, including a ‘surprise cake’ and the Lipteese number where Von Teese rides a giant sparkling lipstick to remixes from her album. 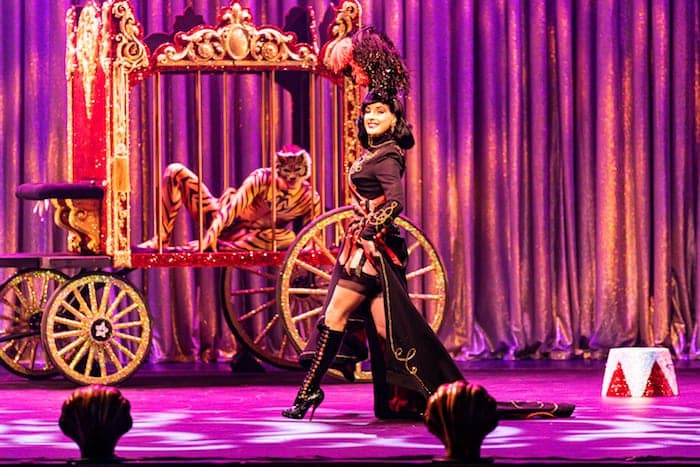 “With the success of my last tour of Europe, I came home more inspired than ever and got straight into building new acts. I am coming back with an even bigger show than I’ve ever toured with before,” says Dita, who will be joined by the world’s top burlesque performers, including Dirty Martini and Zelia Rose.

“For me, burlesque has always been about finding my own power and confidence, embracing sensuality and encouraging others to do the same in their own lives. Glamour is the art of creating mystery and allure, and the new Glamonatrix show embraces all these qualities.”

And the venues she’s chosen, including the Grade II listed Apollo theatre on Stockport Road, perfectly encapsulates the glamour she’s forever striving for.

As Dita says: “Being in these historic theatres with audiences coming dressed to the nines, creates this incredible atmosphere unlike anything I’ve ever seen before.”

The burlesque star will appear at Manchester’s 02 Apollo on 14th and 30th April.