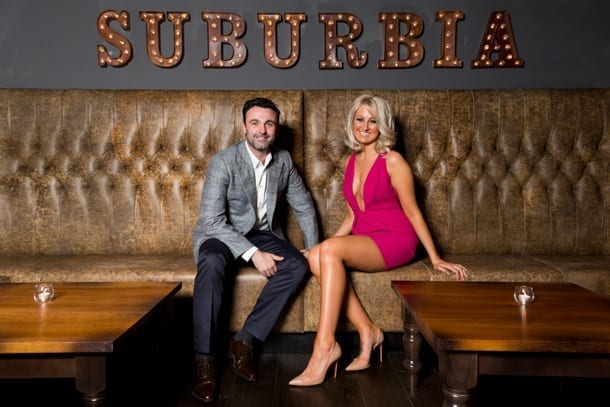 The basement club, on Ridgefield, opposite Grill On The Alley (formerly home to Avici White), welcomed a who’s who of north west celebrities from soap and sport as its owners – husband and wife team Tom and Sarha Thornton-Brookes – celebrate the start of their national expansion plans.

Dispite summer holidays, as many as 350 VIPs made an appearance at the launch party last night, moving and shaking to the dance tunes elaborated by vocalists and percussion.

“Manchester has been crying out for a Suburbia,” says owner, Tom. “There’s lots of great bars but not too many places to finish your night.”

The swanky over-25s nightclub has a sharp and smart dress code and is licensed until 4am. It will be open every Thursday from 9pm until 2am, and then on Friday and Saturday from 10pm until 4am. It is also available for private hire from Sunday to Wednesday.

The space, which has been totally transformed inside and out, boasts five private booths, including a VIP table that seats up to 30 people and has a minimum spend of £1,500.

Booths seat from six people upwards, and minimum spends start at £500. Entry will be free until 11pm, then £10 after.