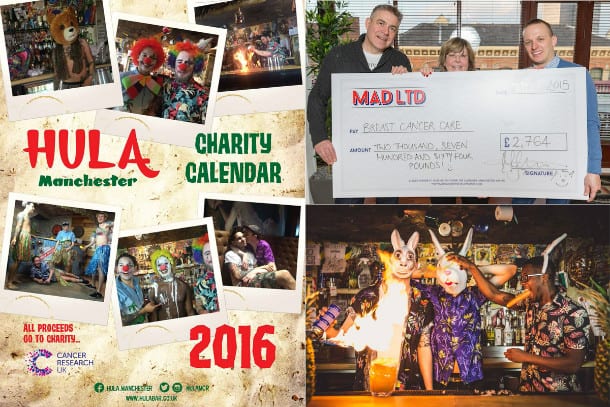 The bartenders at Hula are well known for putting on a great show behind the bar every weekend, pouring copious amounts of rum and flaming cocktails like the legendary Zombie. So Hula have decided to continue their charity efforts by launching a 2016 calendar which features its bar staff in a series of amusing themed photos representing each month of next year. And, as with any weekend at Hula, there are plenty of tops off and fun in each of the 12 professionally shot photos.

A Star Wars tribute for May, entitled ‘May the 4th be with you’, features Chewbacca in a fur coat and a summertime pose with tops off and grass skirts on. There’s also a Valentine’s tribute with general manager, John Gemmell, dressed in a small, pink, cupid outfit!

“Hula is all about having fun, both in front of and behind the bar,” says area manager Abbie Blasdale.

“The staff wanted to do something different to raise money for charity this year as some of our staff and their families have been personally affected by cancer. Our bartenders are renowned across Manchester for their fun loving approach to their work so they came up with the scenes themselves, and we hope the calendar will raise lots of money and bring a smile to people throughout 2016!”

The calendar is on sale now priced £5 at Hula Manchester or Rosylee with all profits going to Cancer Research.

This is not the first time Hula Manchester has raised funds for charity. A charity night held in October raised over £2,500 for Breast Cancer Care.

For more information on the Hula charity 2016 calendar please visit their Facebook page or www.hulabar.co.uk