How steaming back to the future could benefit the economy, the environment and provide a massive visitor boost 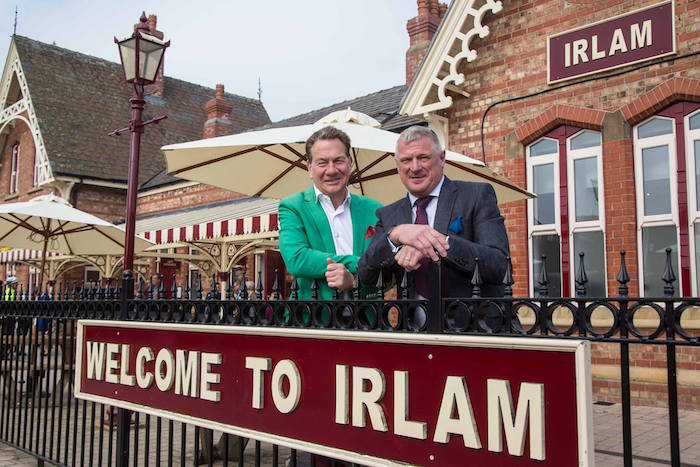 Irlam, cited by Transport for Greater Manchester (TfGM) as an example of what could be in store for dozens of similar local stations if it is allowed to take them over from Network Rail, could be at one end of a proposed  9-mile steam-hauled heritage railway to Timperley that could bring thousands of visitors to the area.

The idea is the brainchild of local millionaire and philanthropist Neil McArthur whose charitable Hamilton Davies Trust was instrumental, along with Salford city council, in funding the restoration of the derelict station at Irlam. It now has a thriving cafe-bistro, heritage centre and community hub with free parking for more than 60 cars, enhanced lighting and security cameras.

The trust, set up by the founder of the telecoms giant Talk Talk in 2004 and now housed in the refurbished former George Hotel on Liverpool Road, has already invested more than £7m into the local Irlam and Cadishead community by way of almost 500 grants for local projects.

The launch of the heritage railway proposal came as the trust and its supporters celebrated the second anniversary of the renovation of Station House, which has seen a 17 per cent rise in passenger figures since 2015 – one of the highest in Greater Manchester.

The initiative was unveiled by Mr McArthur, chairman of the trust, with the backing of Michael Portillo, the former Cabinet minister turned presenter of BBC TV’s Great Railway Journeys series. Central to the £30 million scheme would be the reopening of the Cadishead viaduct which has spanned the Manchester Ship Canal, 75 feet above the water, since 1893. The last passenger services crossed in 1964 and the viaduct was finally closed 20 years later.

Mr McArthur said: “We’re building on the success of what we’ve done at Irlam Station. It would be great to reopen this impressive structure to connect the communities of Carrington and Partington on one side and Cadishead on the other.”

Salford council has plans for 2,000 new homes in Irlam and 10,000 homes and commercial development are planned across the canal in Carrington.

He said the trust was passionate about regenerating Irlam and Cadishead which was devastated by the closure of the local steelworks in the 1970s. Bringing the viaduct back into use would be “a big win”.

“It would be great to incorporate cycling and a heritage railway into the plans as the economic and environmental benefits would be huge. The East Lancs heritage railway [between Heywood and Rawtenstall via Bury] shows the demand with 200,000 passengers a year, so it’s a great example to learn from,” he added.

A trust spokesman said: “We have been heavily and passionately involved in the regeneration of Irlam and Cadishead since 2008, working with local, regional and national partners to make the area an even better place to live, work and enjoy. In our regeneration role, we have been concerned for some time about the poor condition and appearance of the viaduct. Two years ago we started an investigation into the possibility of improving its appearance and putting the bridge back into use.”

The fear is that if something is not done within five years, the decking of the viaduct will deteriorate to the extent that regenerating it would cost tens of millions of pounds.