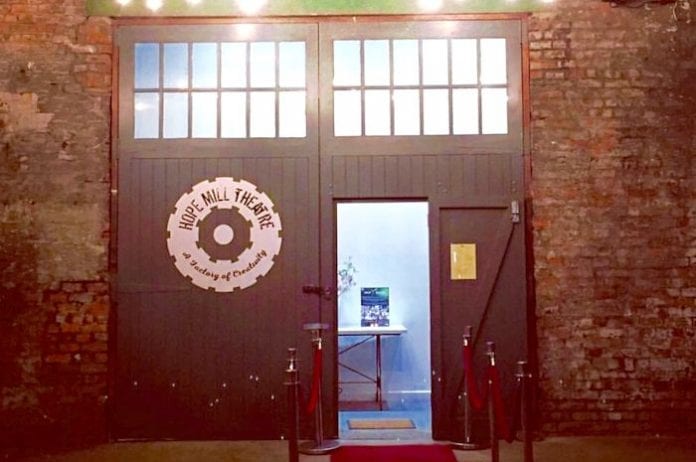 Hope Mill is a Grade II listed former cotton spinning mill on the edge of Ancoats which was considered one of the best examples of a steam-powered textile factory when it opened in 1824.

But who would have thought this giant of the Industrial Revolution could see a second life as a creative hub? Behind the impressive 7 storeys of red brick, there’s 84 studios, workshops, a café bar – and even a theatre in the old engine room.

The mill has been owned and managed by Hope Mill Partnership since 2001, during which time occupancy levels have risen from 40% to 100%.

The studios are used by a range of people from practising artists to recording musicians and it’s where a number of music videos have been made. Local singer-songwriter Little Sparrow made the video for her highly praised cover of The Final Countdown at Hope Mill Recording Studios last year.

And the uses of the building just get more ambitious. In 2014, the empty engine room was transformed into a theatre designed by David French of Hope Mill Partnership. It’s a space capable of seating 150 people, complete with a quirky cafe bar serving up to 50 covers.

Joseph Houston and William Whelton (above), both trained performers still in their twenties, came up from London to set up Hope Mill Theatre in 2015. The theatre has put on productions new to the city including Parade and Hair and began this year with the European premiere of the off-Broadway hit Yank!

We spoke to Hope Mill Theatre’s manager Lucy Price to find out more.

Is there a particular ethos behind the place?

We wanted to provide a platform for the growing number of creatives in Manchester and are particularly focussed on producing high quality musical theatre alongside our resident producer Katy Lipson of Aria Entertainment and various other producers.

What kind of productions can people expect to see?

We are dedicated to producing high quality musicals and have runs of Pippin and Little Women coming up this year, neither of which have ever been performed professionally in Manchester.

Both Hair and Yank!, our most recent in-house productions, are transferring to London which we’re really excited about. In terms of the rest of our programme, it’s extremely varied. We’ve got gritty new writing, cabarets, showcases and work from up and coming Manchester based theatre companies. No two days are the same here that’s for sure.

What about the other creative uses the building is used for?

Hope Mill is so full of creatives it’s difficult to talk about them all. There’s a recording studio (Hope Mill Recording Studios), an independent publisher who have just been shortlisted for a Northern Soul Award (Comma Press), numerous artists, web designers (including our own web designer Grizzly Bear) and a whole host of other people. We’re really lucky to be part of such a vibrant, creative building.

Has the distance from the city centre been a challenge?

We’re actually really lucky that we have access to a free on-site car park, which audience members are able to use and to be so close to the New Islington tram stop. We’re probably one of the most easily accessible city centre theatres! Ancoats is also an area which has been repeatedly voted as one of the trendiest places in Europe and we are delighted to be part of the community here.

We regularly have visitors from other northern cities including Sheffield and Liverpool and they often comment on how easy it is to access from Piccadilly.  Since the theatre backs onto the canal, during the summer our audiences will have a lovely walk in the sunshine and we believe that we’re well worth the journey which isn’t actually that long once you’ve done it a couple of times and know where you’re going.

Any interesting stories that come with putting a theatre inside a mill?

Being based in a Grade 2 listed building has definitely proved interesting, but we’re pleased that we’ve been able to retain the charm of the building.

In the beginning, it was quite chilly but we used to give our blankets to audience members, which they really loved. We’ve invested a lot of money in insulation and sound proofing and it’s definitely made a massive difference.

Owners Houston and Whelton have since been awarded The Hospital Club 110 Award for Theatre & Performance and Hope Mill Theatre itself was shortlisted by The Stage for Fringe Theatre of the Year. So rather than just Edinburgh Fringe, it seems that Manchester really does have its own too.

Upcoming productions include the Manchester premiere of the Tony Award Winning Musical, Pippin and The True History of The Tragic Life and Triumphant Death of Julia Pastrana, the Ugliest Woman in the World – a unique theatrical experience from Watershed Productions performed in absolute darkness. There’s also a play reading club on the last Friday of every month.

Why not give it a visit?