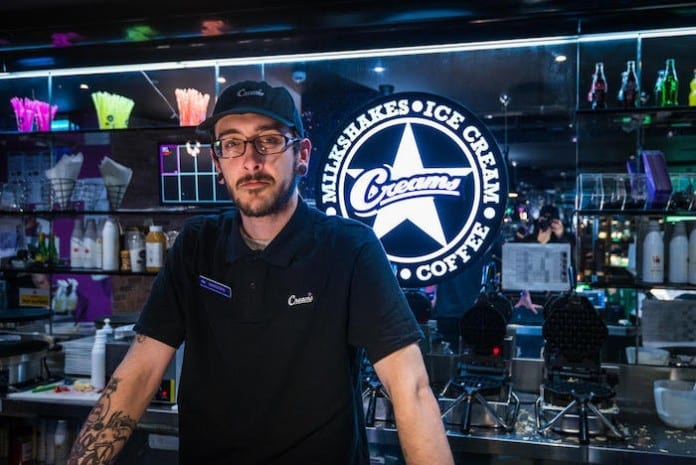 It’s difficult not to be touched by Chris Channon’s story. Humble, positive and determined, he walks all the way from Cheetham Hill to Creams Café in Piccadilly every day, regardless of the weather.

The snow on the morning I met him didn’t bother him either.

“I’m used to the cold and I like the snow anyway. It’s a nice treat since we don’t really get it here.”

After getting with the wrong crowd at a young age, Chris, 27, became addicted to drugs. After spending his rent money to feed his addiction, he ended up on the streets.

But unlike many others he found the strength to pull back from the dark place he was in.

“I was sick of the situation I was in so I decided to go clean and completely give up the drugs. It’s been about four years since I did that. Ended up getting some help moving up here because I knew there were more work opportunities, did some random sales jobs, some charity work and all that sort of stuff.” 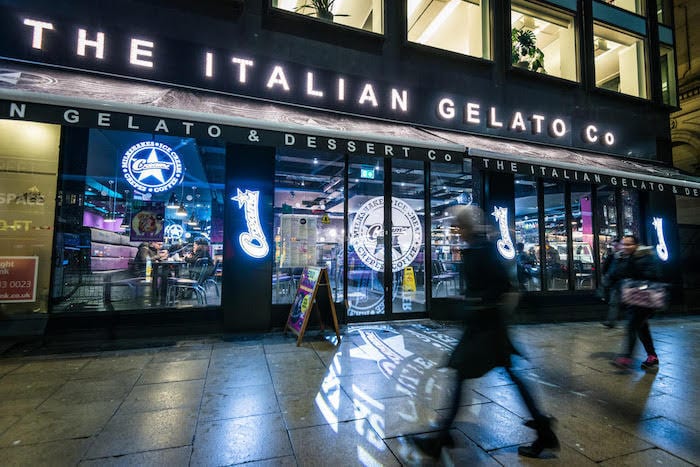 Chris recalls the time he came for a job interview at Creams Café back in May. He wasn’t optimistic. “I’m not that great with interviews” he says.

But franchise owner Izzy Shanaz says she was more inclined to hire him because she knew about his background.

“I think I probably have more respect for him because I knew about his circumstances than I probably have for anybody else. I just think it’s amazing that he’s been able to take that initial step forward and he’s actually carried on with it.

“He’s been with us from the very beginning when we opened the café and in nine months he’s never been sick,” says Mrs Shanaz.

“I’ve never had to sit down with him or talk to him about being late or letting us down in any way. I honestly feel he’s given 100% every day. When you come from a place like that, having discipline is hard. Waking up early in the morning is a big challenge for him but he does it, and he’s been doing it for nine months.”

Nine months on, Chris says the job has completely transformed his life. Besides being able to afford food and to have a roof above his head, Chris says the most important thing is that it gave him a purpose “as opposed to just floating around doing nothing and not knowing how my day will go and what might happen.”

After receiving his third pay cheque from Creams Café, he was able to put down money for a deposit and get out of the temporary accommodation he had been living in.

“I needed to be out at seven o’clock in the morning back at eight o’clock at night so not really a lot of time to rest especially if you’ve been at work.”

He does bits of everything around the café but his speciality is making the waffles and crepes. “That’s my corner as I like to call it”.

Since managing to get back on track, Chris is hoping to be able to move into more secure accommodation – he’s currently living in a share house – and go on holiday. He hasn’t been on one since he was about 12. 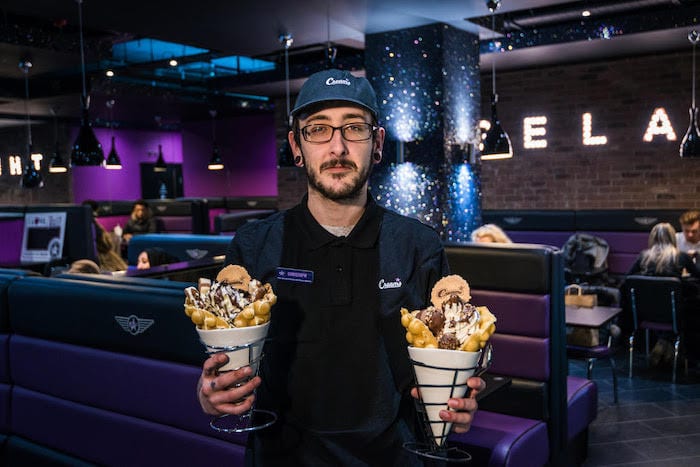 Chris is trying to encourage people who are on the streets to try and turn their life around.

Mrs Shanaz said the recent negative publicity around homeless people is only encouraging them to remain numb, accepting their fate instead of making an effort to learn a new way of living.

“With all this negative publicity people are just inclined to say ‘well there you go.’  But a positive attitude lifts your confidence by a million times and it drives you to actually do something about it.”

Chris concludes that one of the most important aspects of having a job is the feeling you get when you realize you’ve earned your monthly pay.

“If you sit around begging for change all day and you don’t get any results, you just feel worthless.

“If you’re working for the money you earn, you feel like you’ve achieved something. You have earned your money while you’re giving something back. And you can also reward yourself.

“You do it in a selfless sort of way but then it comes back to you in the most basic way which is more appreciated than some grand gesture.”