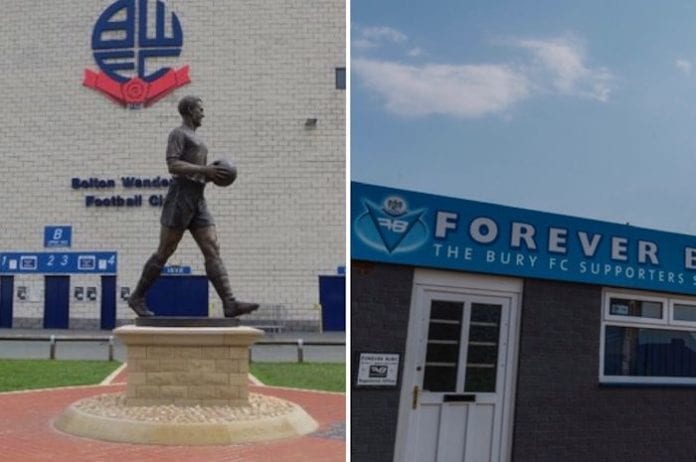 A nailbiting day for fans of Bury FC and Bolton Wanderers ended in heartbreak for Bury fans when the EFL announced around 4pm today that C&N Sporting Risk, the company looking to take over the club, was pulling out of the deal.

The EFL had announced at the weekend that it was working with Bury and C&N to attempt to finalise a change of control.

But following a period of due diligence, C&N decided to pull out of the deal because it was ‘too financially complex’. The League said it would continue to be in discussions with Bury FC until the 5pm deadline. But no further announcement was made and the club is now facing liquidation.

Bury and Bolton Wanderers are two of the oldest clubs in the EFL and just five miles apart.

The day had started optimistically for Bury fans when the club appealed for volunteers to report to the ground from 9am to help prepare it for Saturday’s fixture against Doncaster Rovers.

“With Tuesday’s deadline firmly set, preparations for our first game of the season will commence at 9am on Tuesday morning,” the club announced. “Recent events, over the summer months, have left the club with just a skeleton staff and we must, therefore, call on voluntary help in order to get the stadium ready. All 11,640 seats need a clean and all four stands need sweeping out. Can you help? If so, please report to the ground – armed with buckets and any cleaning materials if possible”.

Hoping for a miracle, that’s exactly what 400 fans did – and a mobile caterer who turned up to feed the 400 free of charge.

⚪️🔵 Many thanks to Owen and his staff who had fed the 400 completely free of charge – awesome #buryfc pic.twitter.com/QQn924M0pD

Bolton Wanderers was also fighting for its life today and facing expulsion from the Football League if the sale of the club was not completed by 5pm today.

A sale was believed to have been agreed last Friday, but the deal collapsed on Saturday morning. The club is currently in administration, and administrator Paul Appleton and his team had been trying to get a deal back on track.

The EFL insisted on a 5pm deadline today for it to be completed or for compelling reasons to be given for an extension to be granted.

The process of closing down the club will start tomorrow if a deal isn’t done by the deadline today.

This would ultimately lead to its liquidation, the expulsion of the club from the EFL and the  loss of over 150 jobs. And, of course, it would be a devastating blow for fans and the town.

The club announced at 5pm that discussions are ongoing with all parties and a further statement would be issued later this evening.