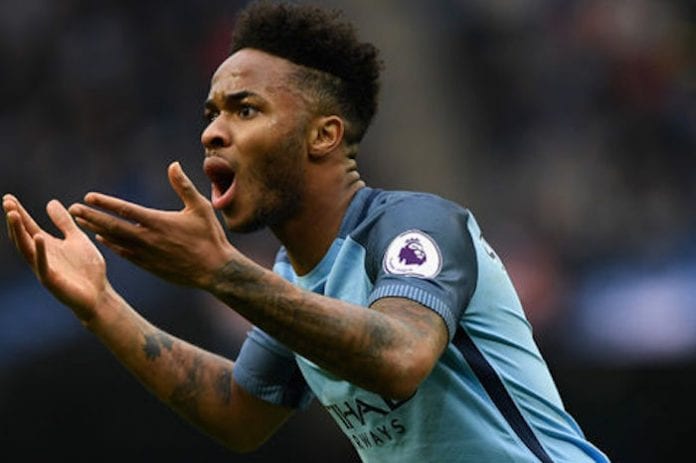 Manchester City are playing some of the best football the Premier League has ever seen and Raheem Sterling is having yet another blistering season. Saturday afternoon’s game against Bournemouth was no different.

Pep Guardiola has many accomplishments to be proud of, but one he can be particularly proud of is how he has transformed Sterling’s career.

Following a poor Euro 2016 campaign, Sterling was most likely concerned for his future at  City with the arrival of Guardiola.

However, the former Bayern Munich manager placed a call to his new striker to reassure him that he was very much a part of his plans.

That phone call appears to have been an excellent judgement call because under Guardiola Sterling has gone from strength to strength.

Last season saw his best goal return ever in a season with 18 goals, making him the fifth highest goalscorer in the Premier League.

He appears to be attempting to go one better again this campaign and is currently joint second with eight goals alongside fellow City striker Sergio Aguero.

Despite the Blues going one goal up against Bournemouth through Bernardo Silva’s 16th minute effort, the first half performance was not up to the usual standard we have seen of late.

The laboured play and sloppy passing resulted in a 44th minute equaliser for Bournemouth – a well-deserved goal which saw them level at half-time.

Pep needed something from his players in the second half to put City back on the front foot.

Leroy Sane was named man-of-the-match but it was Sterling who changed the game with his play down the wings, causing the Bournemouth defence no end of problems.

Speaking after the game to Sky Sports, Guardiola was full of praise for his striker.

“In the first half Raheem was not involved and in the second half he changed the game. I’m very pleased because we needed to win that. Sometimes people, when you win three or four against a side, people start to think how easy it is.

“In the first half it was flat, a lack of rhythm. We are good when we’re playing one way, the other way everyone can beat us. But in the second half the action from Raheem and Fabian Delph helped us to take our rhythm, and the second half was much better.”

Sterling’s goal against Bournemouth makes him the first player in Premier League history to score in his first six appearances against a single opponent.

Since the inception of the Premier League in 1992, only Manchester United and Chelsea have managed to win back-to-back titles, with United winning an incredible three titles in a row.

After that unbelievable finish to the 2012 season which saw City win their first title in dramatic fashion, many pundits felt they would go on to dominate the league, much like United had done.

However good City had been in winning titles, the following season always seemed to present problems in maintaining the momentum.

This season, however, there is an air of positivity around both club and supporters that City could go on to join United and Chelsea on that list.

If that is to become a reality it will be days like Saturday that ensure it happens.

Sure, the high scoring games where they don’t concede or only concede one are fantastic to watch. There isn’t a club in the league that can compete with City when they are in top gear.

In years gone by, it has always been the games in which they struggled to get any momentum going and dropped points which ultimately cost City.

One of the main problems was that if they were missing key players such as Aguero, Silva or Kompany, the whole team struggled.

These days, they have such strength in depth that others can take their place and make things happen. Sterling is now certainly one of those players, as are Bernardo Silva and Leroy Sane, who are also having incredible seasons.

Sane had a turbulent start to this season following a difficult summer when he was left out of the Germany World Cup squad, despite having been named young player of the year last season.

It seemed he had let his disappointment leak into his pre-season training and was either a sub or left out entirely of Pep’s team in the early part of the season.

The winger has since put it behind him and is now putting in the performances that got him so many plaudits in the last campaign.

Aguero didn’t feature on Saturday as following advice from doctors Guardiola didn’t want to take the risk especially with such a busy period coming up.

With Liverpool snatching a late winner in the Merseyside derby, Guardiola is going to need everyone available in the coming weeks and months.