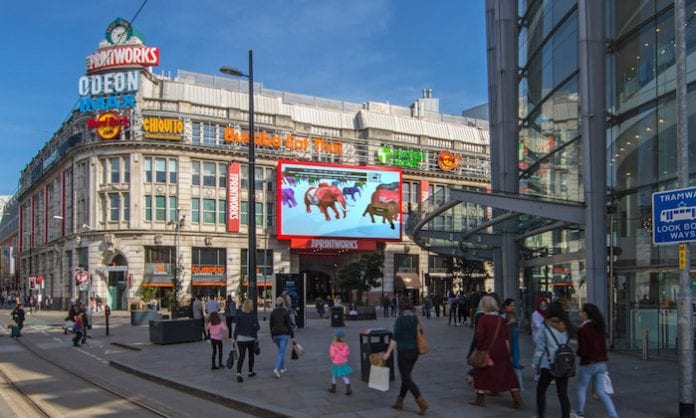 A virtual herd of elephants will be marching across the big screen at The Printworks on March 8th as part of a global campaign to protect African elephants and their habitats.

The campaign starts on the big screen at The Printworks on March 8th, moving on to Birmingham the next day, then London, Paris, Amsterdam and Melbourne, before finally arriving in Kasane, Botswana on March 16th at a key conservation summit being held to discuss the vital need for increased elephant protection.

When the #MarchforGiants herd reaches the summit in Botswana, they will help deliver an Avaaz petition signed by more than a million people, demanding the EU close its legal ivory trade. African leaders present will add their names to that call at the summit.

Despite a ban on the international trade in ivory, African elephants are still being poached in large numbers. One third of Africa’s elephants have already been lost and an average of 55 are killed a day. More raw and carved ivory is traded through the EU than anywhere else.

An #Elephant was shot dead by a #Poacher in #Bago Region #Myanmar on Monday evening, according to the Forest Department. Villagers informed officials and managed to stop the #Poachers from stealing the elephant’s parts https://t.co/UEzWtcc1Bw pic.twitter.com/npfQy32JNG

Donations to #MarchforGiants go to Space for Giants, an international conservation charity working across Africa to secure elephants and their territory forever in the face of poaching and habitat loss.

“There have been a number of huge gains in the fight to protect elephants,” says Space for Giants’ CEO Max Graham.

“China and the US have banned trading in ivory. Poaching is back to pre-crisis levels in East Africa. This is all amazing, and we deserve to be celebrating.

“But there’s a danger here we could become complacent. Poaching is not over. Elephant habitats are not secure. The job is not finished. Joining the global movement that is the March for Giants is a way loudly to add your voice to thousands of others demanding we all keep the pressure up against poaching.

“Seeing that level of global support at their backs as they take the crucial next steps to secure elephant populations forever will be a huge encouragement to Africa’s leaders at the summit.”

Take part in #MarchforGiants by donating £5 or texting ‘GIANT’ plus your name to 70025.