From stints on This Morning and Celebrity Juice, his own shows Let’s Do Lunch and There’s No Taste Like Home, to being crowned King of the Jungle in I’m a Celebrity in 2009, Gino D’Acampo is no shrinking violet.

The celebrity chef moved to London from Italy in 1995 and has become one of the most well-known names in the business. With more than ten cookbooks and a handful of restaurants to his name across the UK, we’re keen to see how his Corn Exchange restaurant, Gino D’Acampo My Restaurant, compares with the other celeb chefs with Italians in Manchester – Jamie’s Italian and Marco’s at MediaCityUK.

The restaurant is in the Corn Exchange on the old Zinc Bar & Grill site. It has less street presence than some of the other more centrally placed restaurants in the all-dining destination. Although there is some outside seating in Exchange Square, the exterior gives very little away.

It’s not until you walk in that you really get any understanding of the space. It’s much bigger than you’d expect and very swish. Italian American in its design with lots of chrome and blue neon, the space comprises a massive double-height prosecco bar, seating for over two hundred over two levels, and a theatrical open kitchen with deli displaying all that lovely Italian produce. 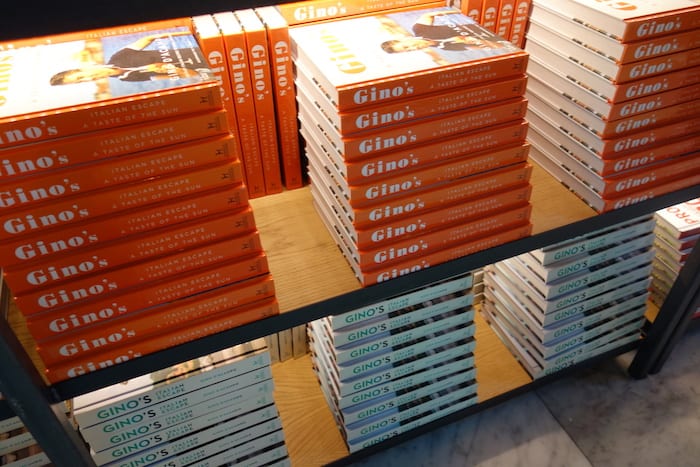 Gino is literally everywhere. Feature walls of Gino pictured with just about anyone and everyone on the planet, bookshelves full of all his cookbooks. He’s even on your table in the form of his own olive oil and balsamic.

Putting the celebrity aside, the menu is a comprehensive seasonal Italian offer of sharing, bruschetta & antipasti, pasta and risotto, pizza, salads, mains and desserts. Just the one menu, which we like.

According to Gino, ‘Simplicity itself… that’s the key to Italian cuisine – fresh, top quality seasonal ingredients allowing the flavours to speak for themselves.’ Let’s see shall we? 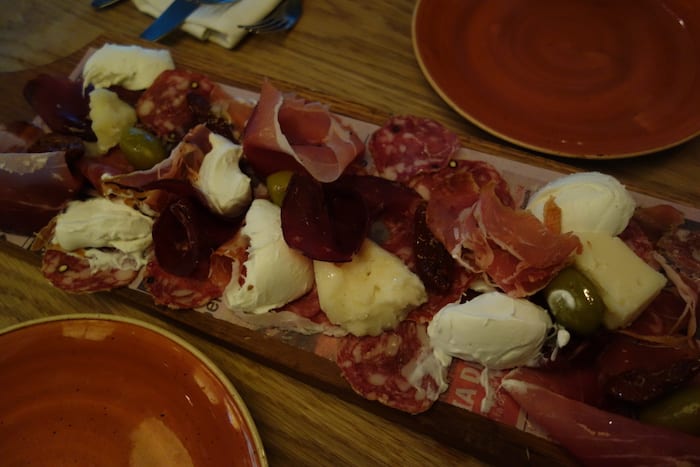 We simply had to order this sharing starter with that name. It’s described as a selection of the best Italian ingredients on one board and looked impressive when it arrived. It was also very big – enough to serve about four. Cured hams from Emilia Romagna and Trentino included parma ham, speck ham, bresaola, and salame Napoli, buffalo mozzarella, pecorino sardo, and ricotta from Campania where Gino was born. Served with pancetta and onion focaccia, juicy olives, balsamic onions, and some rather excellent grissini with fennel and sea salt.  Fantastico, as Gino might say. And probably will. 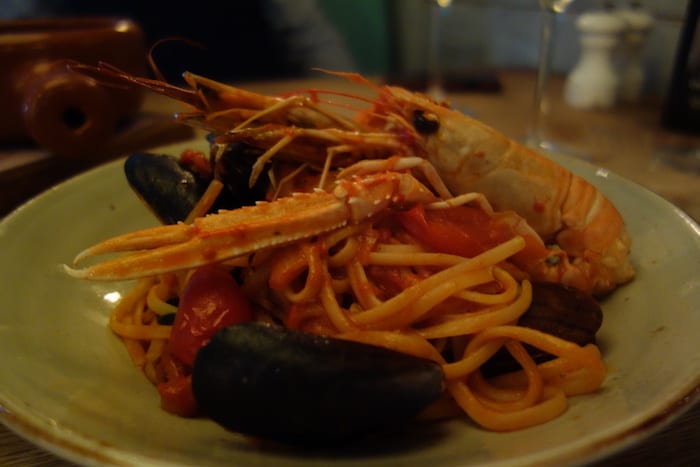 Apparently one of Gino’s mother’s best creations, this was another must-try. A medley of wild red prawns, Scottish langoustine, mussels, clams, calamari, tomato and chilli. It’s salty and sweet. I normally prefer my seafood linguine with a white wine sauce, but this one could have me converted. Bellissimo. Just don’t ask for any grated cheese on top as it’s not how they eat their seafood in Italy, and we don’t want to upset his mama, now do we? 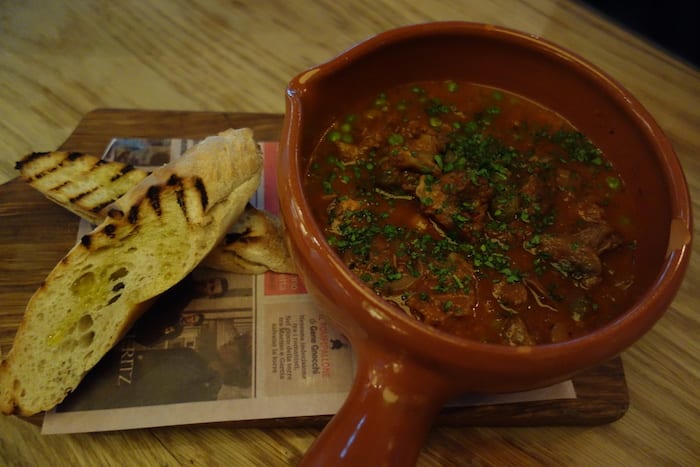 This slow-cooked lamb stew comes with gloriously green and fresh peas, onions, and ciabatta. Although it’s comforting, it manages to remain remarkably light, and was a lovely choice on this very rainy spring day in Manchester. Bella. OK we’ll stop with the Italian adjectives now, although we’re sure Gino would approve.

We should mention their extensive and well-priced Italian wines, with many available by the glass. The Falanghina from Campania (£7.75 175ml/ £28 bottle) was very drinkable and refreshing. Not too dry, beautifully rich, and intensely fruity. And an excellent Nero D’Avola from Sicily (£5 175ml/ £19.50 Bottle) both savoury and smoky, and well matched to our lamb stew. 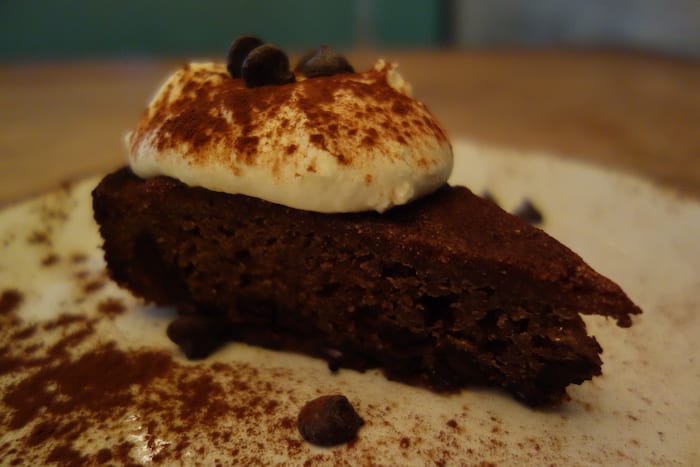 I’ve never tried a chestnut cake before. Originally from Tuscany, the cake was once considered a poor man’s dessert, usually made in the late autumn and early winter once the chestnut crop had been harvested and turned into flour. It gives the chocolate cake a nutty and earthy edge. Absolutely lovely with whipped cream and a coffee. 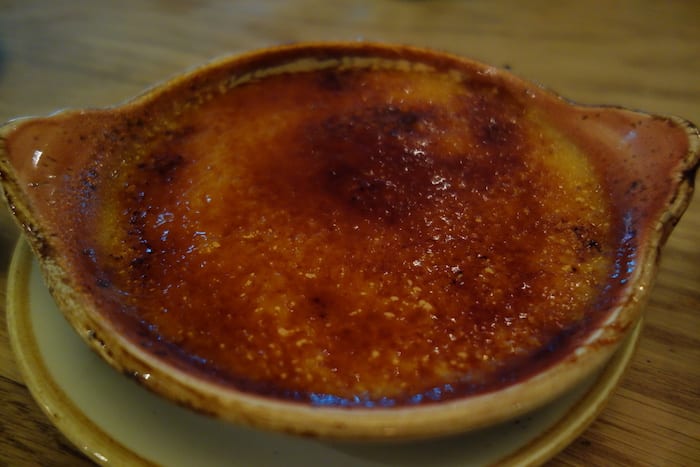 This Catalan-style crème brulee custard pudding hails from Spain originally. With Sardinia under Spanish rule for about 400 years, it’s not surprising the Sardinians took them to their hearts. An impressive yet lighter dessert after a big lunch.

A fantastico setting in the glorious Corn Exchange, some rather excellent service – if in somewhat tight trousers but who’s complaining? – with some very good produce letting the simple Italian dishes speak for themselves.