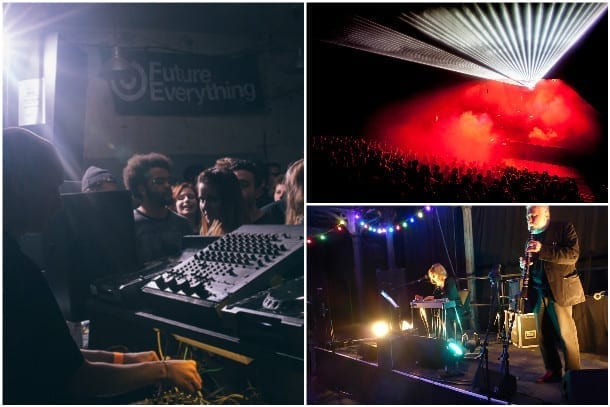 FutureEverything is an award-winning innovation lab for digital culture and annual festival, established in Manchester in 1995. For the past 21 years, it has been exploring the meeting point of technology, society and culture which lies at the heart of the digital debate. Through a community network and regular events it makes connections between thinkers, developers, coders, artists, designers, urbanists and policy makers – inspiring them to experiment and to collaborate in new ways.

Pioneering the practice of city-wide ‘festival as laboratory’ it combines a large scale cultural event – encompassing art, music and discussion – with new technology, novel research methods and playful social experiments. It has been named by The Guardian as one of the top ten ideas festivals in the world.

This year’s festival, entitled Less is More: Rethinking Resources, will challenge audiences to rethink human resources and consider how we navigate an unknown future in a rapidly changing world.

Conference highlights will include presentations from a wide range of international thought leaders, artists, scientists and academics including:

♥ Assemble’s  Mathew Leung, a member of  the 2015 Turner Prize-winning architecture and design collective

♥ The University of Salford’s Andy Miah, Chair in Science Communication & Future Media, and a leading figure in the debate about ethics, emerging technologies and social media

Cultural highlights are set to be equally challenging, provocative and engaging and include:

♥ Smoke Signals  by Ed Carter and David Cranmer, a visual and sonic installation which will see a bank of smoke cannons generating a series of seemingly random smoke rings which have actually been triggered by the constant movement of data across email networks.

♥ Project Ukko by Moritz Stefaner, a joint climate science data visualisation project between FutureEverything, The Met Office and the Barcelona Supercomputing Centre which predicts crucial short, medium and long term global wind energy patterns in a format which is both visually stunning and highly accessible to metrological professionals, climate change scientists, academics and governments around the world.

♥ The Corridor by Andrew Hodson, an interactive audio project where the public can tune into a special soundscape via their mobile devices which has been created by local residents along the emerging Oxford Road Corridor district of Manchester and beyond.

There will also be a vibrant night time programme of gigs, DJ sets and experimental music throughout the festival at various Manchester venues including Islington Mill and Soup Kitchen.