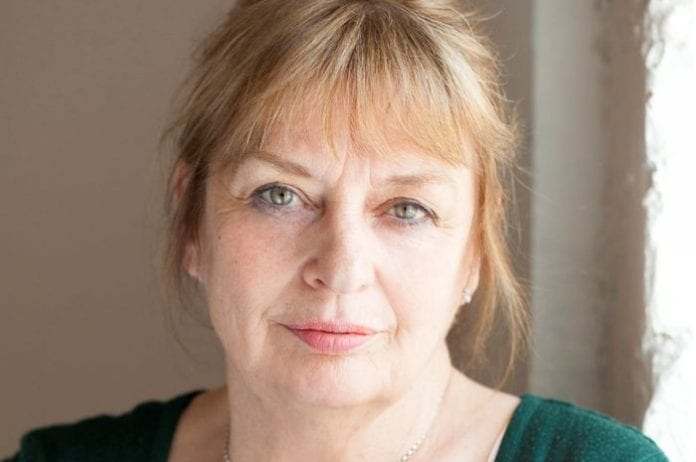 Noreen Kershaw is one of those people you’ll probably recognise from the TV or theatre. She’s been in Life On Mars, Ashes to Ashes, Watching, and Brookside to name a few, and was the first actress to play Shirley Valentine. She has directed episodes of Coronation Street, Emmerdale and Shameless and the hit TV show Our Girl starring Michelle Keegan.

She is currently directing one-man play A Different Way Home at the Oldham Coliseum. It was first staged there in 1998 and became one of its most successful plays. We spoke to Noreen during rehearsals to find out more.

My Mum and Dad had a very busy chip shop and tried a few things to get me out of the house on a Saturday. Tried the Brownies – I wouldn’t dance round the toadstool (I think it was – this was a long time ago). Tried Irish dancing – I had two left feet. Tried elocution lessons – I loved the spoken word.  Then it was down to brilliant teachers who encouraged me. I never really wanted to be anything else but tell stories and pretend to be all sorts of other things.

Do you still get recognised from Life On Mars?

Yes, that series really took off and now with box sets and repeats. A lot of people still seem to be watching it. My character Phyllis was great and had a real mouth on her. I’m glad because she gave as good as she got because at that time it seemed to be very much a man’s world in the police force and women officers were referred to as ‘skirts‘. It was great to be part of such an iconic and popular series.

How did directing come about?

At Bury Convent, as it was then, we were encouraged to put shows on. I even had a teacher, Mrs Smith, who gave up her lunch times to coach me for drama school. I’ve always directed even when I was doing a lot more acting. Then one day I was doing the sit com Watching and I asked the director Les Chatfield what was needed to be a television director. He asked me if I thought visually. I replied ‘yes’ and was later accepted to direct Coronation Street.

What attracted you to A Different Way Home?

I’ve known Kenneth Alan Taylor for years and seen him in loads of things but never worked with him. So, I was not going to pass this chance by. Also, I love the Oldham Coliseum, as it’s a great to place work in. It has a great atmosphere when you come and see a play there and it’s filled with dedicated, happy people who work there.

Why do you think the play was such a big hit in Oldham first time round?

Roy Barraclough was at the height of his Coronation Street fame and people came to see him. But then they realised that the play is a little gem in itself and that’s why I wanted to do it.

There’s people of all ages on our streets that we hardly know. Here we get a look into some of these lives, their loneliness and what makes them tick and their humour. It’s really funny as well.

There’s only one way – going to watch The Shakers [Bury FC] home and away on the coach. I love it.

The people and Heaton Park – the lungs of Manchester. I get in there twice a day with Jimmy Riddle (the dog).

I think there should be a middle-sized theatre for grass roots productions in Manchester.  The groups and actors who can’t get a foot in the door of the larger venues. I have nothing against ambitious projects, but they should also include and carry along and support local work including, writers, directors, technicians and actors.

A Different Way Home is at Oldham Coliseum from 31st January until 9th February.