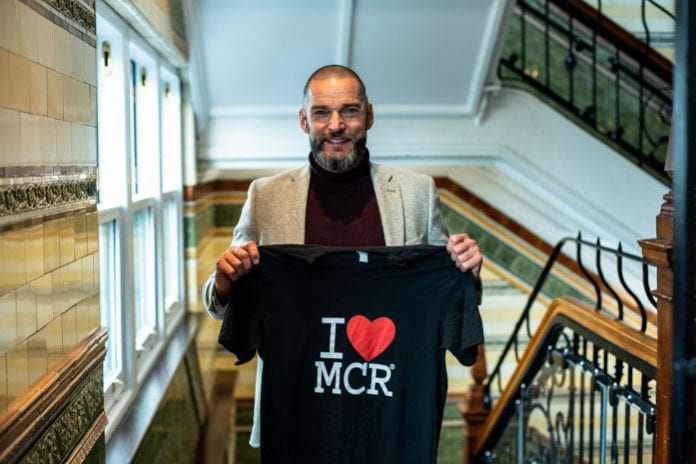 The world’s most famous maitre d’ and star of TV shows First Dates, Million Pound Menu and Gordon, Gino and Fred: Road Trip, Fred Sirieix is the general manager at Galvin at Windows, a Michelin-starred restaurant in London’s Park Lane.

His two decades in the food and drink industry have won him numerous awards and made him an expert on hospitality and what makes a successful restaurant.

I caught up with him at the Corn Exchange to discuss why customer service is important, what we can expect from the new series of Million Pound Menu he’s currently filming in Manchester, and what he loves about the city.

The first series of the BBC show saw two budding restaurateurs who thought they had what it took to go from pop-up to profit compete each week for life-changing sums of money to turn their dreams into a bricks and mortar reality.

For this new series, there is a different selection process for contestants, says Fred.

“We have invited a selection of operators to come and present to the various investors who are interested,” he explains. “Then there’s the opportunity for them to come and cook and present themselves for questions.

“At the end of that process, which lasted for three days, we selected six operators and we’ve invited them to come to Manchester to run a pop-up for two days.

“It means everything to some people, and we have a huge responsibility. It’s daunting for them to be on television – but it’s not just about that. These people have real lives and they want to get a real investment for their business. It’s their first bricks and mortar.

What does he think makes a successful restaurant?

Fred hasn’t had much chance to eat in many places in Manchester because of his jam-packed filming schedule, but he has tried a couple of places in the Corn Exchange while he’s been up.

“I have eaten in Gino’s,” he says. “It’s good, not just because it’s Gino, the food is good and the service is good. I’ve eaten at Mowgli and it’s very good. I’ve had excellent service in Manchester, really really good. It’s been brilliant.”

Good customer service is something Fred is passionate about, and he learnt its importance as a young boy.

“I remember when I was little, I asked my dad, who was in the medical profession, why he shaved before he went to work,” he recalls.

“And he said, ‘because I need to look professional, I need to look the part, I need to inspire confidence in the patient. They need to know that when I come into that room I am going to look after them and make them feel better’.

“That’s where the connection was made with service. It’s about making people feel special. It’s so easy, it’s just about basic kindness, respect. Treating others the way you would like to be treated. Good service is about connecting with people, it’s your ability to understand someone else.”

Fred is famous for saying that the customer is always right. But does he really believe that?

“The customer is always right,” he insists.

“They pay for my Christmas. You can’t argue with someone who is going to feed your kids. You have to respect the hand that feeds you. And as much as I don’t have to agree with all the customers, they feed me – and at the end of the day, that’s what it boils down to.”

Fred worries that hospitality is not taken seriously as a career, despite the number of restaurants opening, and in 2012 he started National Waiters’ Day, a campaign celebrating the food and service industry.

“It’s a campaign to market the industry so that people understand the importance of it, but also to bring pride back to the industry,” he explains.

“Hospitality isn’t taken seriously. The government is now saying that low-skilled people in hospitality will not be favoured for visas post-Brexit. Nobody wants to be considered low-skill.

“There is a disdain that politicians and people in general have with the industry. And yet everybody likes to go out. We already had a staff and skills shortage. And now there’s going to be a shortage of about 60,000 people a year.”

Despite living and working in the capital, the man who loves to meet people feels very at home in Manchester, a city he clearly adores.