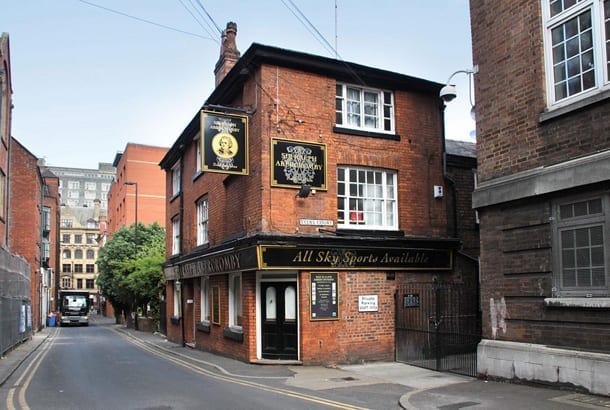 The city is going through constant change, but in the midst of change and often unnecessary reconstruction, pubs are a link between present and past, often reaching back a hundred, even two hundred years or more. Many are architectural gems, all are centres of conviviality and storehouses of mostly happy memories. And of course, you can get a drink and maybe a bite to eat!

Where in Manchester do three pubs stand side by side? Sounds like a pub quiz question. The answer is on Kennedy Street. There you’ll find, cheek by jowl, the Vine Inn on the right, the City Inn in the middle and the back of the Waterhouse on the left.

Let’s start with the Waterhouse. It’s named after the celebrated architect Alfred Waterhouse, who gave us the Town Hall, the Assize Courts (sadly demolished in the 50s), not to mention Strangeways prison and the Natural History Museum in London. The Waterhouse occupies a Georgian-style terrace – originally separate properties – on Princess Street, opposite the Town Hall.

Though it harks back to the Victorian era, it only became a pub in recent times. Prior to that the building was used for offices. You’d never guess, as the rooms have the feel of a private home. There’s a good selection of beer and food.

The rear of the Waterhouse faces onto Kennedy Street, and right next door is the City Arms. When I entered I thought it had the look of a Dublin pub, with its traditional style interior. According to historic mapping, it became a public house between 1900 and 1920. It’s small and as they say in German, gemütlich – cosy with a nice relaxed atmosphere. At the City Arms they take great pride in the quality of the beverages they serve.

Just step outside, turn left and you are standing in front of the Vine Inn with its green tiled exterior, reminiscent of the Victoria Baths. We enter a small bar area and to the right there are split levels. I’ve walked (or staggered) up and down those stairs many times in the past. The upper room has a more refined feel than I remember, with a literary alcove and leather sofas. The recently opened lower room is in the style of a brewery cellar.

The Circus Tavern was mentioned in the feedback from my previous article and so I decided to head there to check it out and make sure it isn’t under threat. It’s located on busy Portland Street and takes up one section of a quaint building that looks more suited to a Lake District village than a big city. It bears the title of the smallest bar in Europe. I saw two Oriental visitors taking each others’ photos outside, proving that big, modern and sophisticated are not necessarily attributes needed for an international tourist attraction.

Inside, the Circus Tavern lives up to its reputation. The tiny bar is on the left and there’s just about room for one person and possibly one cat to swing by on the right. There are small and cosy rooms front and rear. This pub has the charm and intimacy of an establishment located in the middle of the country. There’s a detailed history of the pub in a frame on the wall. Suffice to say: It’s old. It’s small. It’s genuine. 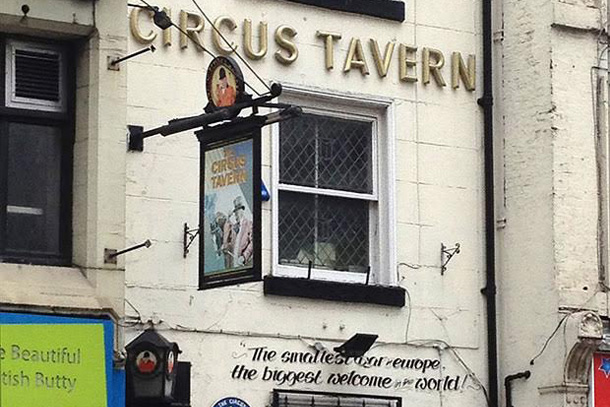 At the Circus I met retired pub manager George Archondogeorge, originally from Cyprus who has lived in Manchester since 1960, a great story teller and a true Manchester character! During his long career he worked at Expresso Bongo cafe, the Douglas pub and the Sir Ralph Abercromby. He assured me the Circus Tavern is not under threat.

I’d like to finish with an apology to the Abercromby, located next to the old Bootle Street police station. From recent publicity, we know that the police station building is to be demolished. I wrongly said that the Abercromby had already closed, but in fact it is very much open. I should have checked things out more thoroughly, so for that I offer my sincerest apologies. It’s a pub I’ve visted many times in the past. We used to jokingly call it the ‘Abercrombeh’. It’s one of Manchester’s classic pubs and people really ought to go and visit.

Please take a look at my book, currently in its final stages, Manchester Before and After, documenting the changes in Manchester since 1996.