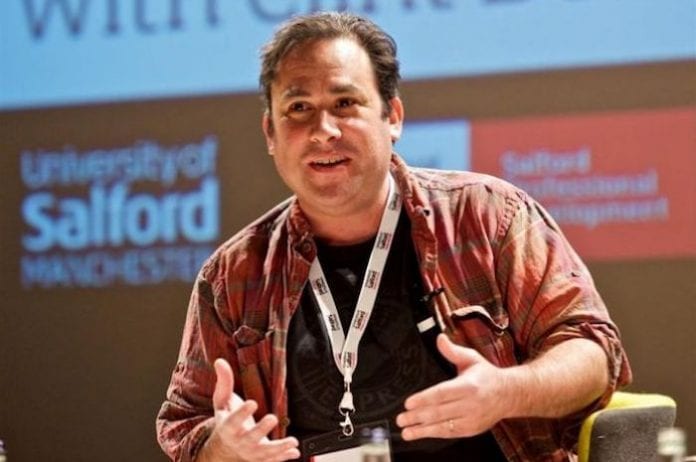 Former Simpsons writer Josh Weinstein is to be awarded an Honorary Doctorate of Arts from the University of Salford. This accolade comes in recognition of Josh’s outstanding contribution and achievements in television as a well-known American TV writer and producer.

Josh first began his creative media career working on a number of short-term projects such as the variety show ‘Sunday Best’. This was before he and best friend Bill Oakley had their big break writing for The Simpsons, after their first script “Marge Gets a Job” (S4 eps 7) was given the seal of approval.

Hired by the show on a permanent basis in 1992, Josh went on to write a number of successful episodes including the classic “Who Shot Mr. Burns?”, before going on to become an executive producer of the show, collecting three Emmy Awards for his work.

His work on the hugely popular science-fiction sitcom, Futurama, earned him a fourth Emmy in 2011 and another project, CBBC’s Strange Hill High – created in Altrincham – which he considers to be “the best project” he has ever worked on.

Josh has worked closely with the University of Salford’s School of Arts and Media since 2013, having been involved in the School’s annual Salford International Media Festival. He was recently announced as the festival’s Patron and now promotes the University on various international platforms, helping to develop partnerships, recruitment, enterprise and industry support on both sides of the Atlantic.

Speaking ahead of the graduation ceremony, Josh said: “The University of Salford is driving forward the next generation of our creative talent. Disney, for example, has a School of Animation, where some of the best animators have received their training. I think we could have something similar here, so don’t go to LA – stay here.”