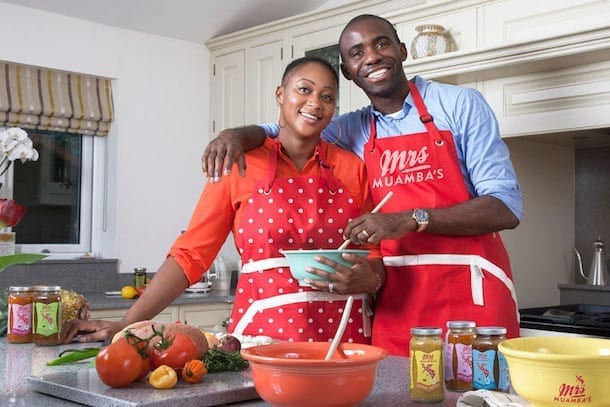 Since near-fatal on-pitch cardiac arrest in 2012, Fabrice Muamba has been championing grassroots football and home cooking with his wife.

The ex premier league footballer and his wife, Shauna, are coming to Booths MediaCityUK tomorrow to launch a brand new range of charitable Caribbean cooking sauces to help raise money to make defibrillators available to all.

Mrs Muamba’s cooking sauces were born following a life changing event which made Shauna and Fabrice Muamba think about how they could make a difference. Fabrice suffered a sudden cardiac arrest in 2012 at the age of 23 whilst playing for Bolton Wanderers against Tottenham in an FA Cup quarter final match watched by millions of TV viewers. Fortunately a defibrillator was on site and it was this equipment, along with the combined skills of the medical teams on the scene and at hospital which saved his life.

Shauna Muamba explains; “I grew up in Jamaica and it was here that I fell in love with how food was prepared. I’ve picked up my cooking skills and inspiration from family and friends, and from the meals I have prepared over the years for Fabrice’s teammates, and so set up my own Caribbean catering company.”

Mrs Muamba’s supports Arrhythmia Alliance, the heart rhythm charity and their campaign to raise awareness of sudden cardiac arrest, “Hearts & Goals”. A small donation from the sale of every jar of Mrs Muamba’s sold goes to Arrhythmia Alliance (Hearts and Goals) to help towards its aim to make defibrillators available to everyone. Shauna Muamba shares this vision and hopes to have defibrillators in the supermarkets that the Mrs Muamba’s range is stocked in. The charity will be attending the launch event on Wednesday offering free pulse checks to Booths customers.