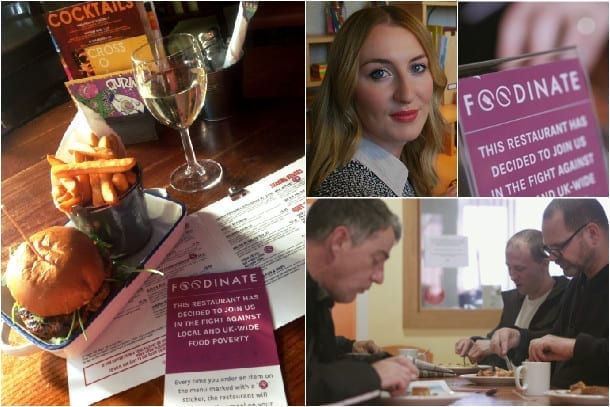 Next time you eat at Bangers and Bacon, WellHung at the Kitchens in Spinningfields and George’s Dining Room & Bar in Worsley, you have the option of choosing a meal which will help feed a homeless person.

That’s because they are all participating restaurants in Foodinate, an innovative scheme which, like all the best ideas, is a simple one. Every time you choose a meal from the menu marked with the Foodinate logo, another meal is donated to someone in need – paid for by the restaurant.

During a four-week pilot in September last year, the scheme secured more than 1,000 meals for homeless people. Now it’s up and running properly, and in March alone 316 meals were served at the Booth Centre for homeless people in Manchester city centre. And a total of 1,336 meals have been served since it launched.

Founder Caroline Stevenson, who was named Entrepreneur of the Year at the free2network business awards in 2015, came up with the idea for Foodinate after seeing the level of need on the streets of Manchester.

“Growing up in Manchester, I felt so angry seeing the increasing number of people sleeping by the sides of the road, begging for money and food. It’s crazy to think that we live in the seventh richest country in the world, yet more than 13 million people are living below the poverty line. With 1 in 6 parents in the UK reporting having gone without food themselves so they can afford to feed their families, I knew there was a social need for my venture. I wanted to to create a sustainable impact on this enormous issue and Foodinate aims to do just that.”

Of George’s decision to partner with Foodinate, co-owner Ryan Giggs said: “We really liked the simplicity of the concept from the outset and we are proud to be one of the first restaurants in the area to sign up to it. Hunger and homelessness are really big problems in the UK and Manchester is no exception. We think the Foodinate program is a great way for restaurants and their diners to get involved and start having a positive impact together.”