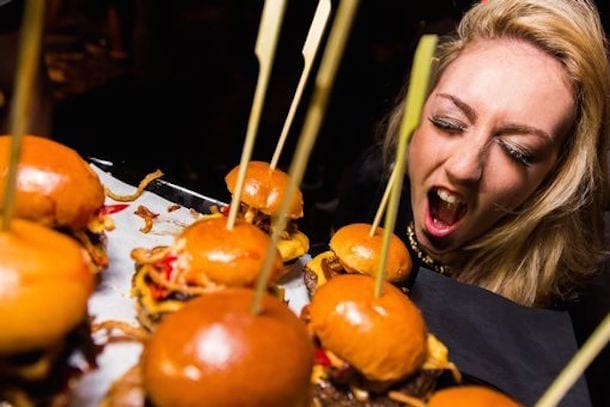 Simon Binns stresses that when it comes to grub, for some people, looks are more important than taste…

An interesting snippet from a good piece by The Guardian’s eminently readable Marina O’Loughlin caught my eye this week.

As the piece examined the marriage of food and social media, a local talking head popped up.

‘Franco Sotgiu of Solita in Manchester … acknowledges the internet effect. “It pains me to say, but when creating specials I’ve learned that anything with ‘big, fried, bacon or cheese’ in the title sells well. The better they look in a photo on Twitter and Facebook, the more RTs and likes they get, the better they sell.”

‘“In Manchester, ‘dirty’ still sells well, and even though I’ve tried relentlessly to push more grill items and less-calorific dishes, the stuff that looks sloppy-great in a photo can often achieve 500-plus RTs on Twitter. So it makes sense from a business point of view to lead with these.”’

To young aspiring chefs who care about the finer side of dining, learning their craft with the emphasis on precision, invention and that oft-mentioned ‘narrative’ of their dishes, this must read like a spatula through the heart.

Why bother when you can just stick some Pot Noodles on top of a burger and let the audience do the marketing for you?

So when we complain about the prevalence of ‘dirty’ food, are the customers, doing enough about it? Are we looking across the menu for the ’less calorific’ options or are we selecting items because we think they’ll photograph well and allow us to show off on social media, or get a reaction from the virtual world.

Nobody is going to retweet a salad now, are they?

One of my younger friends (twenties, although most people in their thirties are now younger than me too), admitted to me the other day that her Instagram, Twitter and Facebook were ‘full of pictures of food, with the occasional selfie in between. And even then the selfies are of people eating.’

She was heading off to an evening being held by a photography school at a city centre pub designed to show people how to take better snaps of their scran with their mobile devices (at least the silver lining is that the days of some lunatic whipping an oversized SLR with flash gun are gone).

On the menu that night was a spring chicken dish, a scallop starter, a sharing platter, all very good. But how will it compare on Instagram against something – anything – wrapped in bacon?

In fact, I’m sure some of you will have seen a video that has been shared by at least a dozen of my Facebook friends this week. The video is simply of a man making a cheese sandwich, then wrapping it in two layers of streaky bacon, and frying it a pan. Then he slices it, to reveal an oozing cheese middle encased in a golden bacon shell.

And while we’re on the subject of ‘dirty food’, I would like to use this platform to object in the strongest possible terms to the branding of the Scotch egg as junk food by some junior schools.

The Scotch egg? Egg is good for you. It’s full of protein. And the meaty bit is, erm, pork, which is ok in moderation. And I don’t think ‘breadcrumbs’ have ever been namechecked in the obesity crisis.

Fair enough if you’re sending your kids to school with a Ginster’s every day, but I don’t know anyone who is. My 8-year old will be devastated. She likes the odd Scotch egg in her lunchbox, just as much as she likes a ham sandwich, some carrot and cucumber sticks and hummus, or whatever else we give her. And she’s built like a whippet. Oddly though, things like Fruit Shoots seem to be fine. And actual fruit, much of which is high in natural sugars.

The poor old Scotch Egg though? My real fears are for the mums of Chorlton and West Didsbury, who will be having their £6 artisanal Manchester Eggs (or similar) sent back home with their frightfully distressed children, moving them to ring the school and shout ‘BUT IT’S FROM HICKSON AND BLACKS’ down the phone.

So I’m just going to send my daughter in with some Scotch and an egg tomorrow. That should sort it. Never did me any harm.