On August 9 2011, following three days of disturbances in London, copycat riots broke out in Manchester and Salford.

The riots caused millions of pounds worth of damage. But out of the wreckage came a remarkable display of civic pride and community spirit.

A small minority of thugs, criminals and opportunists had taken to the streets to riot and loot. A much larger number of decent folk came together to show their pride in their city.

The morning after, hundreds of people turned up in Manchester city centre to help clear up the mess left behind by the rioters.

Thousands of people expressed their love for our city on Post-it notes which covered a “love wall” in the Arndale.

And the I Love MCR logo began to appear on posters, on shop fronts, buses, lamp-posts and hoardings. It was even projected on to buildings. 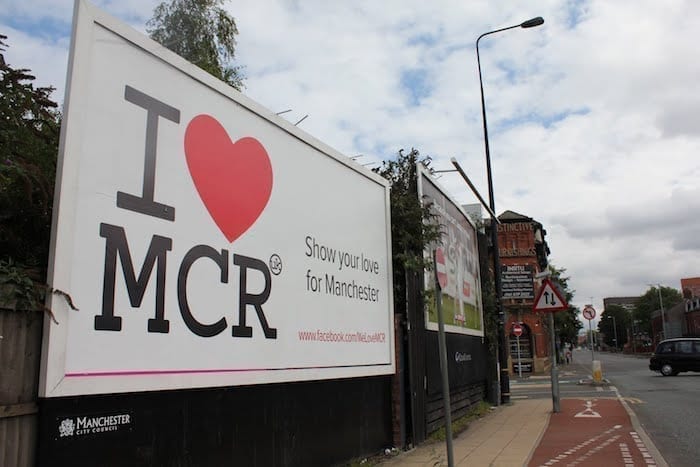 The campaign attracted thousands of followers on Facebook and Twitter, with thousands of users changing their profile pictures to the I Love MCR logo. Manchester Airport posted the logo above check-in desks and on screens inside the terminals. United and City players were pictured wearing I Love MCR T-shirts and Manchester Pride handed out I Love MCR flags during the Parade.

The I Love MCR logo united Manchester against the rioters and became a symbol of the city’s resilience.

Five years later it lives on as a vehicle for bringing together Mancunians, and anyone who loves Manchester, to celebrate the city and the things that make it such an extraordinary place to live and work.