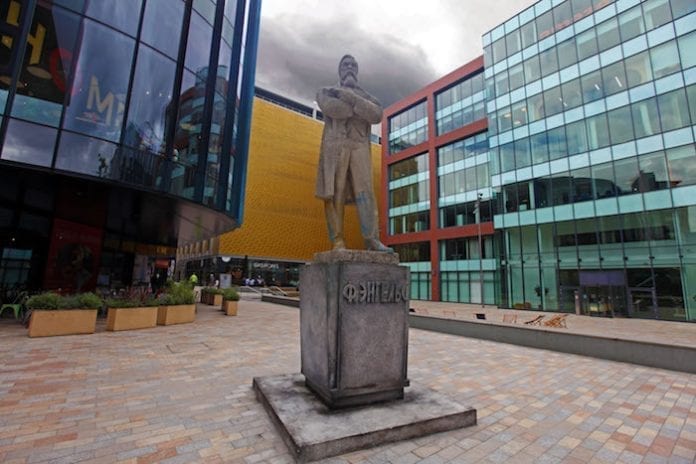 First Street, Manchester’s newest dining, drinking and entertainment destination is Mancunian through and through.

Little remains of the vital role in Manchester’s history that the site which is now First Street played. For more than 100 years from 1825, the Gaythorn Gas works powered the rise of the world’s first industrial city.

More recently, what is now the Number One office building was home to the British Council and BT. And the area was almost the home of the BBC.

The traffic-free streets and squares are named after people who played leading roles on making Manchester the coolest city on the planet.

Stroll down Isabella Banks Street, named after the 19th Century poet, novelist and biographer of “The Manchester Man” Jabez Clegg.

Take a break in James Grigor Square, honouring the unsung hero who, as chairman of the Central Manchester Development Corporation, helped kick-start the renaissance of 21st Century Manchester.

Amble along Annie Horniman Street, named after the manager and patron of the first regional repertory theatre company in Britain, the Gaiety, opened in Peter Street in 1912.

At the heart of First Street is HOME, formed by the merger of two of Manchester’s best loved arts organisations, the Library Theatre Company and the Cornerhouse – enigmatic French footballer-turned-actor, Eric Cantona’s favourite city venue.

Visited by almost two million people since its 2015 opening, HOME Mcr showcases first class theatre and dance shows, the best independent films from across the world and avant garde art exhibitions in its contemporary galleries.

HOME’s presence – and First Street’s proximity to Manchester’s main university campus – gives the area a bohemian atmosphere reminiscent of the Northern Quarter in a setting more like Spinningfields. In short, the best of both worlds.

First Street’s bars and restaurants offer a wide range of options from snacking to fine dining and real craft beers to sophisticated cocktails.

It was Masterchef winner Simon Wood’s choice for the location of his first restaurant, the high-end dining venue Wood. He said: “I was instantly attracted to First Street and see this very much as the next go-to place in this exciting city.

“It was a fantastic opportunity to be part of a thriving community…everything you could need in a brand new high quality neighbourhood and I share the development’s vision for this as an up and coming destination.”

The Laundrette makes “eating and treating” fun with its bottomless brunches, “Quick Wash” lunches and high quality cocktails while the Indian Tiffin Room, which outgrew its acclaimed but tiny birthplace in Cheadle brings its unique and authentic Indian street food to its strikingly colourful, daringly industrial 100-plus cover restaurant in Isabella Banks Street.

The Gasworks, meanwhile, is a state of the art modern brewpub with its own in-house brewery from the team behind the Dockyard pubs. Hearty traditional pub grub helps it all go down a treat.

There’s good food and drink to be had at HOME too, and at the four-star Innside Manchester Hotel, famed for its striking architecture and designer interiors.

First Street may be on the edge if the city centre but none of Manchester’s other popular hospitality and entertainment enclaves is more accessible.

Deansgate-Castlefield Metrolink stop is just across the road, linked to every destination on the entire network, Oxford Road Station is nearby and it is served by Metroshuttle bus.

And the popular venues of Deansgate Locks and the iconic Bridgewater Hall are five minutes away on foot.

In short, First Street has got the lot.