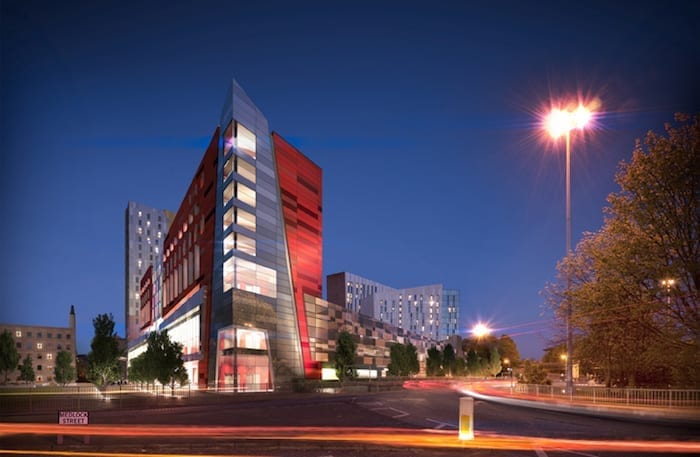 They say first impressions are lasting impressions. But Simon Binns has changed his mind about First Street…

Of all the recent major developments in Manchester, the one I was most cynical about was First Street.

When I first heard about it, it didn’t quite seem to make sense. It was big – 20 acres – and a bit far out to be a part of anything. And plans for the scheme were a bit rangy. Anchored by a large and fairly uninspiring office building, it seemed to want to be all things to all men.

A bit of retail here, some leisure there, some student stuff. Some odd statues that looked like massive desk ornaments. All a bit meh.

Worst of all, of course, it was taking the Cornerhouse out of play and replacing it with a new, shiny and can’t-possibly-be-any-good replacement in Home.

The smart money had been on a short-term move to Spinningfields. But First Street? It was viewed as being too far out of the city centre, disconnected from their colleagues and customers. Staff were even given a map showing them the quickest route to and from their new home to the town hall, to try and convince them it was closer than they thought. It was only seven minutes, said the map, although it was via a fairly convoluted route.

No matter who you spoke to, First Street didn’t have many fans.

But now it’s here, I’ve changed my mind. I like it. I really like it. And plenty of people seem to agree.

Home is great. The name is still dodgy, of course, but the venue itself is bright and breezy, inventive, fun. The bar and café are wonderful. The Melia Hotel – INNSIDE on First – is a belter too. An eye-catching piece of modern architecture that gives way to a laid back and elegant hotel with a cracking restaurant and drinking terrace, to boot. The Vita building is the most luxurious student digs in the city. Even the Q Park car park looks nice.

It’s starting to feel like a proper neighbourhood. On a sunny day, there’s a real joy in sitting on the INNSIDE terrace, or outside Home, with a beer and a book.

Even at weekends, the area is developing a buzz. The opening weekend drew crowds of thousands, way over the expected numbers. It appears to have made a decent – and lasting – first impression.

And not just on the public. German investment firm Patrizia obviously took a fancy to the scheme as well, snapping it up from previous owners Ask for an undisclosed sum in May.

It feels safe and clean, a cocoon from the chaos of nearby Oxford Road. It complements the existing bars on Whitworth Street West. As that junction changes – with bus improvement packages and rail station refurbishments – leading to the quiet resurrection of the ‘Corridor’ partnership, and Bruntwood refurbishing key sites such as the former BBC site and Manchester Business School, First Street starts to feel less like an isolated developments site, which it perhaps did at the start, and more a part of a wider, emerging city district.

As to where the scheme is heading next, there are some quality operators lined up on the food and drink front.

Rumour has it, The Indian Tiffin Room, Dockyard and The Liquor Store are all taking units there. The only chain going in with them is Pizza Express, which could be far worse. I’m one of those annoying people with children, and we like Pizza Express.

There was talk of the former Hotspur Press building being folded into the scheme at one point, to offer short term office space or studios for creatives. But that idea seems to have gone away.

The public realm is good quality but perhaps needs to be softened a little. But the back end of the site is still taking shape and there’s room for more green space. Hopefully, the new owner will realise the non-monetary value of turf.

First Street is growing into itself, something that can be difficult for developments to do. Just ask Piccadilly Place.

First the worst, second the best? Not one bit. And you don’t even need a map to get there.