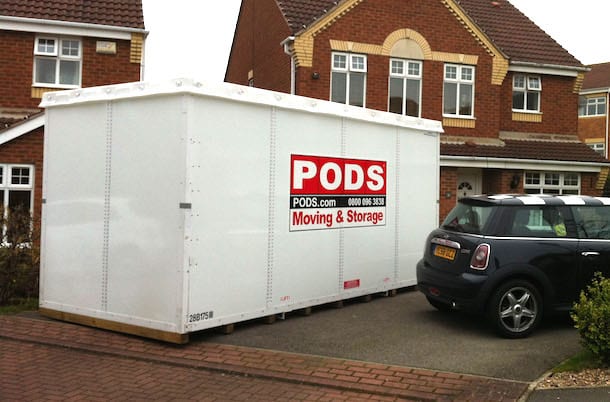 The first UK PODS franchise has proved successful after generating a gross revenue of £200k in its first year of trading. The Manchester based business has already completed over 350 moves and rented over 240 containers during the last 12 months. The PODS service has been utilised by several impressive UK businesses, including Debenhams, Belfor, Event City, The LEGO Show, Lloyds Banking Group and the Moda Fashion Show – held at The NEC in Birmingham.

Established in 1998 by owner Peter Warhurst and originating in Florida, the PODS innovation allowed for a complete on-site/off-site moving and self-storage solution. In 2008 PODS was acquired by Arcapita for $451.4 million and today the business operates in 48 U.S. states, Canada, Australia and the UK, through its company-owned and franchise network. To date PODS have completed more than 2 million deliveries with over 142,000 containers worldwide.

Scott Cassidy, Managing Director of Swift Moving and Storage in Manchester, took notice of these impressive figures and began researching ways to introduce the PODS concept to the Manchester market.

When asked about the decision to bring PODS to Manchester, Scott commented:

“I have always been impressed with the PODS business model, as it provided a unique solution to a universal problem. After seeing how much it had achieved in the US, I wanted to introduce this concept to the market over here, as I felt this business model could really flourish in the UK. Our first year has been outstanding, with our customer base steadily increasing. The success we have seen so far has proved that the PODS concept can work in the UK marketplace, and we’re hoping these good results will continue moving forward.”

PODS is dedicated to immersing the business in the local community and having a positive impact on the surrounding areas. The recent arson incident at Manchester Dogs Home saw the business donate two containers, used to store donated food, blankets, bedding and toys.

“After we heard the news about the fire at the Manchester Dogs Home we were horrified, and as a local business, wanted to offer our help in any way we could. We have donated two of our containers to the home, who are still using them now to store various supplies.”

PODS has enjoyed its first year in the UK and plans for the future include larger warehouses, more branches, and to develop its business model across the country.