Fed Up of Burgers? Manchester’s Raising the Steaks

Burgers, burgers, everywhere. Sure, it’s been fun. But now it’s time to get serious.

The long-awaited announcement that Hawksmoor is set to open in Oddfellows’ House on Deansgate can quite genuinely be classed as ‘proper news’ for the city’s food sector.

“Manchester is now a serious pull to the big London brands”

I hate the phrase ‘game changer’, but the news did send ripples through Manchester’s food and drink family. Firstly, because it confirmed that Manchester is now a serious pull to the big London brands who are looking for a reliable, high spend, high quality customer base (we always knew it was there) and secondly because if you serve steak and it’s not very good, you either have to get better, or give up and go home.

The news came less than 24 hours after Fazenda – another very good operator who have carved out a fine reputation in Leeds and Liverpool – are also coming to the city, about 150 yards away, to The Avenue on Spinningfields. Brazilian steak done the Brazilian way is the company’s claim.

Add that to Gaucho and Miller & Carter and that will give you four operators all making the claim that they offer the best red meat mountain in the city centre. Only one of them can be right. 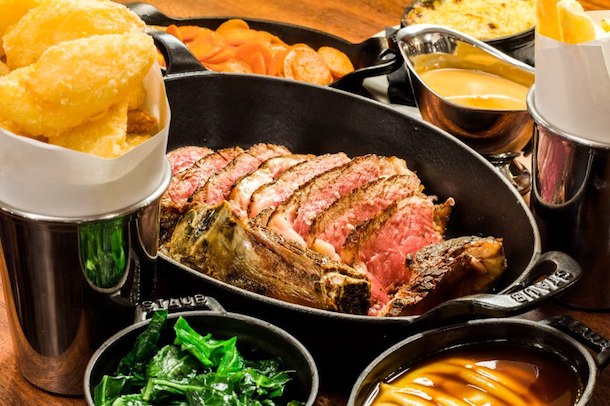 As the city still reflects on the L’Entrecote experience (some thought its one-meal-only schtick was its downfall, others thought it was good enough to have survived longer than it did), Hawksmoor and Fazenda will both arrive with their reputations in tow and a willing public – but in a city so known for its use of social media, one that is quick to judge and extremely vocal.

So the gloves are off and the aprons are on.

But what does this mean for the unrelenting onslaught of burger operators who have set up camp here. Is there room for both? Will people forgo two burgers to afford to take themselves out for a steak? Will two meat factions emerge, divided into ‘hipsters’ and ‘serious foodies’?

Probably not. But the quality of Hawksmoor should shine a light on the lesser gifted burger botherers and steak slingers.

Of the city’s patty providers, some will stay and some will go as the meat mountain thins out. The likes of Almost Famous are a) good and b) local, so you’d back them to survive an inevitable cull of operators after a growth spurt so overwhelming, the city will settle on its favourites and leave the less interesting ones behind.

For Hawksmoor, if it can do what it does in London, consistently, it will become one of Manchester’s most talked about restaurants. It already is, and it doesn’t even open until next year. National newspapers will all make the journey North to come and try it out, even though they have several restaurants in London.

Another feather in Manchester’s cap, but one that sends a clear message to its rivals. There may be blood. And not just from a rare rump steak.