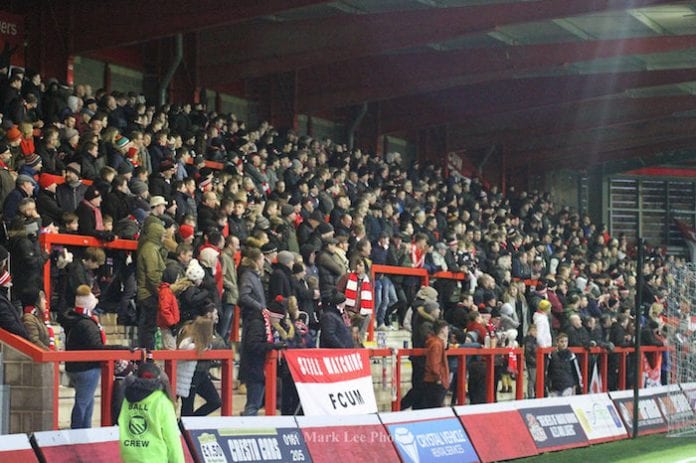 Fresh from playing in front of a crowd of 4,000 at last Saturday’s derby against local rivals Salford City, FC United of Manchester are looking forward to another big occasion this weekend.

They are playing SV Austria Salzburg, another supporter-owned club, in a friendly this coming Saturday, February 4.

The Austrian club was formed in 2005 by supporters of the original SV (Austria) Salzburg after it was renamed FC Red Bull Salzburg by its new owners, who also changed the club’s colours from its traditional violet and white to red and white.

The club started out in the seventh tier of Austria’s national league system in 2006 and rose through four successive championships to the third tier in 2010. In 2015, the club gained promotion to the division one tier below the Austrian Bundesliga, but were relegated the following year.

Although the game will be played at FC United’s Broadhurst Park ground in Moston, manager Karl Marginson says the weekend will have a ‘Euro away’ feel to it.

The friendly kicks off at 5pm on Saturday to allow Salzburg fans enough time to get to Manchester that afternoon. Anyone arriving earlier in the day will be able to watch FC United’s reserves play Hyde United’s reserves at 2pm on the 3G pitch at Broadhurst Park.

Supporters can also watch a live gig at ‘Course You Can Malcolm’, FC United’s volunteer-run club afternoon from 1pm-5pm featuring Space Monkeys, who were the last band to sign for Factory Records, and Schutzei, the Salzburg terrace guitar legend.

On Sunday, February 5 it’s FC United’s Women against Egerton Ladies at 2pm on the 3G pitch, then FC United’s first XI are in action again on Tuesday at 7.45pm against West Didsbury & Chorlton in the semi-final of the Manchester Premier Cup.

Meanwhile, the club’s annual beer festival runs from Friday to Tuesday, offering more than 20 ales and ciders from local breweries, with Essenburger Austrian lager in honour of the visitors.

The games against SV Austria Salzburg and are pay on the gate. Admission is £9 for adults, £5 for concessions and £2 for under 18s.

The cup tie versus West Didsbury & Chorlton is also pay on the gate. Admission is ust £5 for adults, £3 for concessions and £2 for U18s.

The games on the 3G pitch are free.

For more details including opening hours of the beer festival, visit www.fc-utd.co.uk