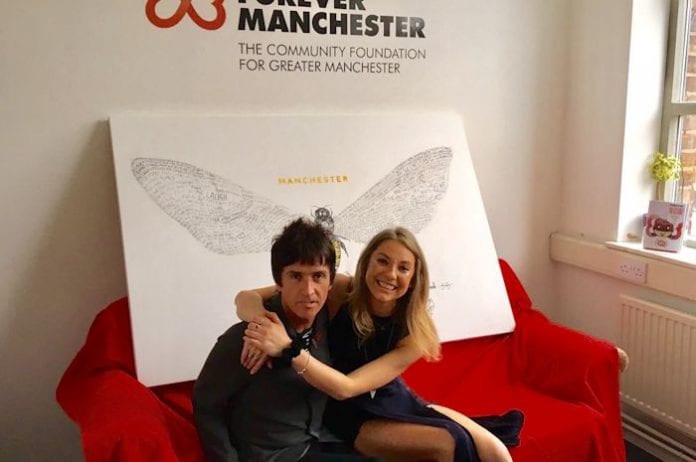 A massive piece of Manchester artwork created in a ten-hour live painting session by artist Amy Coney and featuring Tony Walsh’s poem This is The Place is being auctioned for the We Love Manchester Emergency Fund – and now includes the autographs of a growing number of famous names.

It took Amy 10 hours to paint the work during a double disco takeover at Gorilla in memory of the 22 who died during the 22nd May terrorist attack on Manchester Arena.

It was decided that the artwork would go to online auction in an attempt to raise funds and give people an opportunity to own a piece of genuine Mancunian artwork.

Lined up to add their signatures are Maxine Peake, Bez, the Courteeners, Charlatans and Christopher Ecclestone.

The Bee will even be flying to Kendal Calling and Blue Dot festivals – so  expect many more famous signatures.

Amy has already undertaken a number of live artworks and street artwork in the city. She was the winner of Manchester Art Battle Tattoo Convention 2016 and has also created art in association with Wonder Woman Festival.

The auction, which has been suspended with the top bid currently standing at an impressive £5,600, will be relaunched on 1st August.