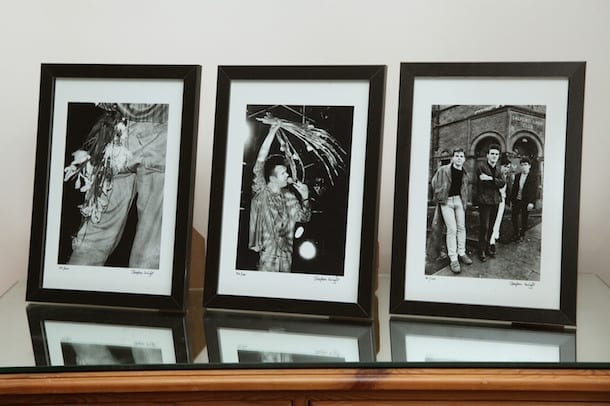 It’s 30 years since the release of The Smiths’ landmark album ‘The Queen is Dead’, and in celebration a new exhibition at The Lowry will showcase the work of the photographer behind the record’s famous cover.

“That photo of The Smiths was taken on a murky and cold Salford day in 1985,” said Stephen. “They were at the peak of their success and I’m so proud that the image has become recognisable worldwide. It’s funny really – I remember developing the shot in a makeshift darkroom in my bedroom – using chemicals that I kept in old fizzy drinks bottles.”

The exhibition coincides with ’30 Days of The Smiths’, an event at The Dock which weaves music and lyrics from the band with a series of stories from Salford residents who all share the surname Smith. Devised by poet Jackie Kay and DJ Oberman Knocks, the tales are set against classics from The Smiths such as ‘This Charming Man’, ‘Panic’ and ‘What Difference Does It Make?’ along with additional contributors from writer Ali Smith and BBC Radio 6’s Mark Radcliffe. It will premiere on May 5.

Michael Simpson, director of visual art at The Lowry, added: “The Smiths are of the most influential British guitar groups of all time – and Stephen’s shot outside Salford Lads Club is how they are remembered to this day. His collection is a must-see for any Smiths fan – and we are proud to display them in the same season that we present ’30 Days of The Smiths’, a Lowry commissioned sound artwork that brings together music of The Smiths with the stories of real Smiths living in Salford today.”