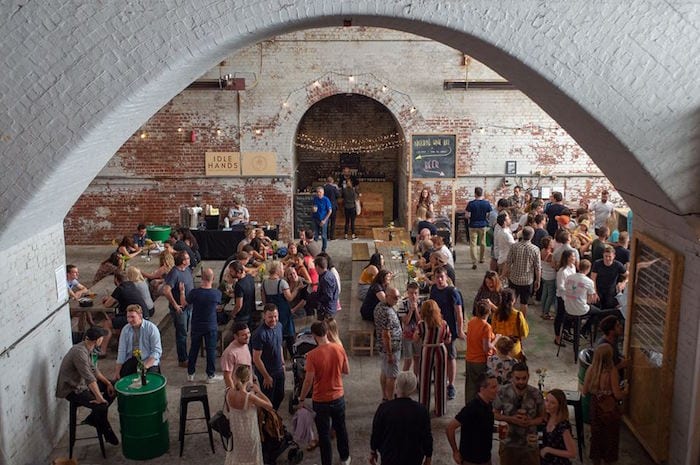 And this year attendees are in for an extra special treat, as Manchester’s hottest new bakery Long Bois is set to make its debut.

The creation of ex-Pollen patissiers Jenny and Bethan, full details of the offering are currently being kept under wraps. All is set to be revealed this Saturday as they make their first appearance just around the corner from ex-employer Pollen’s original home on the Piccadilly Trading Estate.

There’ll also be a natural wine bar hosted by Where The Light Gets In sommelier Caroline Dubois and Season’s Eatings supper club’s Issy Jenkins, under the name of their new joint project Isca, and local craft beers from the likes of Blackjack and Cloudwater.

Honest Crust will be in attendance serving up Pucce – woodfired pizza dough sandwiches stuffed with a variety of fresh seasonal ingredients – whilst Tender Cow will be bringing back last year’s hugely popular porchetta rotisserie sandwiches alongside a selection of fresh summer salads.

And Chef Mike of Umbra food (a roving supper club of note, well worth keeping an eye on) will be serving a menu of Cornish crab pasties with saffron aioli and a salad of grilled sweetcorn, courgette, green chilli and grapefruit.

Noted by organisers as one of Manchester’s rising stars, local foodies will definitely want to stop by and see what he’s all about.

Now entering its second year, the festival has been set up to raise money for Keep Our NHS Public, which campaigns for an accountable, publicly owned and funded NHS; and Headway, a charity which supports people affected by brain injury.

Both incredibly worthy causes, last year the festival raised over £11,000  – a record that organisers are hoping to top this weekend.

As well as a range of stalls from an assemblage of Manchester’s finest chefs, there will also be a number of workshops to get involved in.

Whilst it’s too late to get into Britain’s Best Home Cook winner Pippy Eats’ sold-out dumpling workshop, you can still learn to make briouate (a sweet or savoury Moroccan puff pastry traditionally filled with meat mixed with cheese, lemon and pepper) and enjoy some rare vintage beer tastings courtesy of Beermoth.

And textile artist, still life stylist, prop and accessory maker Mariel Osborn will be there to give curious crafters the chance to make their very own clay coasters.

Entertainment will be provided by DJs Lee Gorton, The Devils Jukebox, Liam Quinn from Beat Boutique and Scott Taylor, with more still set to be announced.

Taking place on Saturday 3rd August between 11am and 11pm at Fairfield Social Club, entry is free but donations are welcome if you’re feeling generous.