The great British pub is a long-serving icon in British history and culture. Like any city, Manchester has a long and rich history, brimming with culture and moments that changed the course of time.

This city was a hub for trade during the Industrial Revolution and many pubs opened between 1700 and 1900 as watering holes for the growing population with their increasing disposable income.

Step back in time and discover the history of Manchester’s traditional boozers and the social history of the communities they served. Starting at The Britons Protection, your map will take you on a tour of some of the oldest pubs in Manchester that still retain their old school charm. With opportunities aplenty for sampling the ale along the way of course…

This early 19th-century building was first recorded as the Britons Protection in 1820. The interior dates from a remodelling of about 1930.

The long front bar, parallel to the street frontage, has an ornate lincrusta ceiling. A corridor gives access to a series of rooms, with wood panelling, fitted seating and bell pushes to summon service.

Note the glazed sashes which could once be raised to provide service to those standing in the corridor. (Today, service to the rear rooms is at the small hatch at the rear of the bar). Fine tile work and glass.

Peveril of the Peak

Another early 19th-century building (the ‘Peveril of the Peak’ was a stage-coach that ran between London and Manchester before the coming of the railways). Remodelled in about 1900.

The spectacular glazed tile exterior is matched by a high-quality interior, with glazed screens, wood panelling and some tilework. There is also a (very small) drinking lobby – an area where customers who preferred to drink standing up could do so.

The fully tiled exterior seems to have been a feature of Manchester pubs in about 1900, and a number of other examples can still be found, although most have lost their interior fittings.

This is an exceptionally rare survival of a small, basic 19th-century beerhouse in the centre of the city.

Adapted from a late 18th-century building, probably a weaver’s combined dwelling and workshop, around 1870-1880, it is a single plot width, with a narrow corridor on the left and two small rooms to the right, with plain wooden seats and wooden partitions. 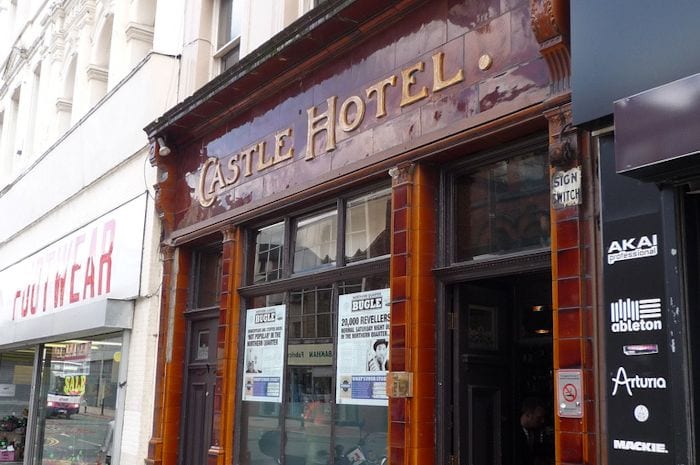 An early 19th-century building remodelled by Kay’s Atlas Brewery in about 1904 when it acquired the glazed tiles to the exterior of the ground floor.

The interior has been opened out a little, but it still retains a couple of rooms and some excellent tile work.

The tiled bar front is a spectacular and rare survival, whilst the mosaic floors in the former entrance lobbies, lincrusta ceiling, and mirrored bar back in the front (Public) bar, and the fitted bench seating in the Saloon Bar are also noteworthy.

Another early 19th-century building, with ‘Gothic’ detailing, said to have been built as a court-house associated with the nearby markets. This is probably an urban myth, attempting to explain the architectural style of the building (few pubs were built in the Gothic style, which was reserved largely for religious and educational buildings).

It reopened in 2005 after being closed for over ten years. Before closure it had a spectacular interior with a plaster ceiling with enormous pendants (which once supported lamps) and wooden panelling allegedly recycled from the airship R100, which was broken up after its sister the R101 crashed in France in 1930. The panelling, sadly, did not survive a fire soon after closure, but the ceiling survives, restored in one bar and left ‘as found’ in another. 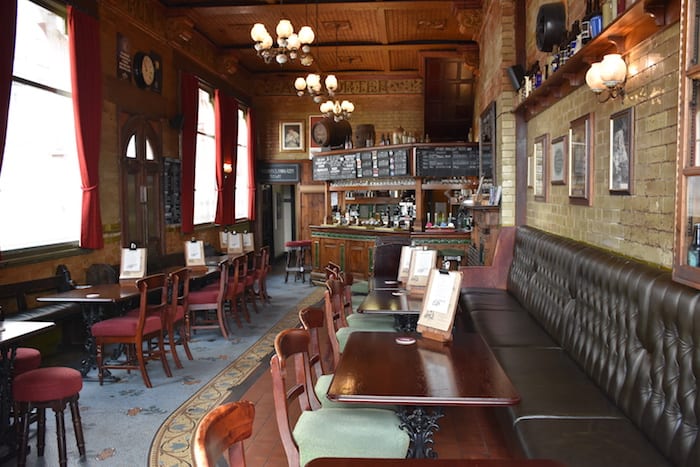 Built by McKenna’s Brewery of Harpurhey in 1888 (note the date in the gable) who spared no expense. The exterior of the ground floor is finished in polished pink granite, with brick above. However, the glory of the pub is in the interior tile work, with a frieze listing the different drinks on offer (it is claimed that a former landlord would challenge customers to finish off the list of drinks given on the tile work frieze, and never lost his bet on the outcome).

Sadly, the interior has been opened up, and the long counter which once served a couple of rooms has been removed (but note the ‘ghost’ in the floor tiles). The permanently locked exterior doors halfway down the outside wall show where the division between the former bars, marked by an entrance lobby, once fell.

Should you feel a little unsteady on your feet, it may not be due to an excess of drink – the floor slopes quite steeply down from the Rochdale Road end.