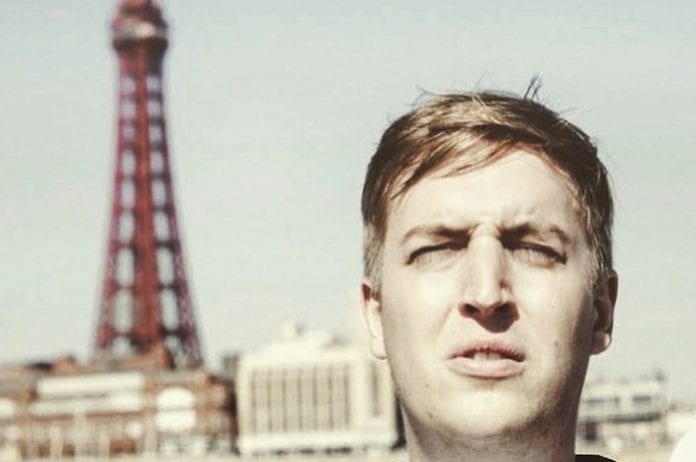 Blackpool, What A Shit Place To Die was one of our favourite titles at this year’s Greater Manchester Fringe Festival.  Oldham-born Mark Newsome’s one man show was so well received it returns to Manchester later this month.

We caught up with him to discuss the play and the issues it explores.

It started at school when my Mum persuaded me to join the drama club because I was getting bullied and she thought it may improve my confidence. I loved doing it and it kinda grew from there really. I joined Oldham Theatre Workshop and it made me the person I am today. I stayed for seven years. Then I went on to the National Youth Theatre and  eventually trained at drama school at the Royal Welsh College.

How did it feel stepping onto the stage for the first time in a one man show?

It was absolutely terrifying. I was sh***ing myself. But director Grace Cordell did a great job making me feel at ease and just fully owning it. After the first scene I relaxed into it and loved it. The buzz from the audience and being able to connect with them was amazing. In the first show in Manchester, an audience member got up and told me to move to the side because she couldn’t see the video playing behind me. Very funny!

Why did you write the play?

I’ve wanted to write a one man show for a while but didn’t know where to start. A wonderful writer, Phil Pearson, saw me in a show and got in contact to say he wanted to write for me. I met him and we both clicked. I told him my ideas about doing a show based on my life and experiences and he instantly got it. We did the show in Manchester and it went down a storm with audiences and reviewers and had standing ovations both nights, which was totally unexpected. It’s dark and twisted but, hopefully a few laughs in there, too. We have a cracking team and I’m very proud of it.

Tell us about the protagonist, Billy Costello

Billy is based on me. He’s a young working-class actor with lots of issues including his and his family’s acceptance of being gay. My family are great with me about who I am, but in this show things are very different. He’s impulsive, swears too much and probably drinks a bit too much as well.

What are your real thoughts on Blackpool as a place?

I have no qualms about Blackpool! People think I’m from Blackpool but I’m actually from Oldham. I ended up there last year after a family row which left me feeling suicidal on the beach and questioning a lot of things. I think Blackpool has a charm and during season it’s alright, but I don’t think I’d want to live there. It’s okay for a day trip. It’s fun.

How do you make ends meet when you’re not acting?

I’ve done a whole host of jobs. I’ve had over 15! But I do whatever I can really. My favourite non-acting job is working at the Science and Industry Museum front of house.

I love the Northern Quarter. I love the Royal Exchange. I love Three Minute Theatre.

Blackpool, What A Shit Place To Die is at Three Minute Theatre on Friday, October 19th 2018.