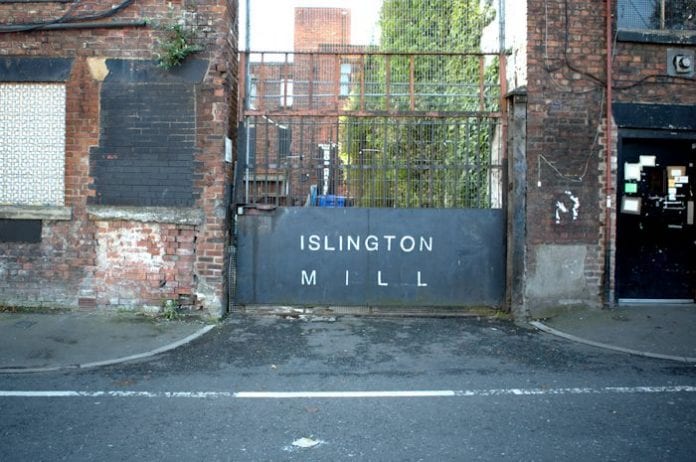 The other Saturday I chaired a panel discussion at Texture, a new venue in Manchester’s Northern Quarter. Organised by the Partisan Collective, the event was entitled ‘Radical Space is the Place’. All seats were taken and the energy in the room was inspiring.

So why the discussion, why the big interest?

The organisers and the audience are looking to find or establish a different kind of venue; a ‘radical space’, a home for emerging art, ideas, writing, and music, with free access, embedded in the community, incorporating studio space for artists, function and exhibition rooms, and the ability to nurture collaboration.

Partisan Collective have already crowdfunded £15,000 to start the ball rolling.

Important cultural activity is often created by marginal communites in cheap spaces in rundown parts of a city. Such spaces breed new ideas, but tend to get squeezed out by urban regeneration, commercialisation, and gentrification.

But there’s something to be said for trying to bring music, art, theatre, and film together, to cross-pollenate.

The ideas being talked about at the Partisan Collective event reminded me of the non-institutional Arts Lab projects of the late 1960s, of which the Drury Lane Arts Lab in London, founded by Jim Haynes, was the first example.

Haynes was a big fan of  collaboration, describing his aim to “bring people together in a real involved way” (John Lennon and Yoko Ono‘s first joint artwork was exhibited there).

By the end of 1969, there were around ten fully-fledged Arts Labs in Britain, about twenty more without permanent premises but nevertheless active.

I’ve seen mention of several radical spaces set up in Manchester around that time, including the Studio Deltra Lab on Corporation Street, one at 3 Booth Street and another in the Joynson Memorial Hall on Hooton Street in Ancoats.

All three appear to have opened and then folded a short time later. But perhaps older readers have memories of these venues?

One radical space that lasted longer was the Squat on Devas Street (near to where Academy One is now). Early in the 1970s the university authorities planned to knock down the building in order to make way for a car park, but students occupied it, and arranged gigs there as well as theatre performances and meetings of various campaign groups (it closed in 1982).

I guess the average age of the audience at Texture was late-20s, and while they all seemed inspired by Manchester’s tradition of independent activity, I think most people there are unaware of these specific examples of radical spaces, or any that followed in the 1980s.

It’s healthy that the young challenge the world they inherit. One of the panel members talked about the success of Islington Mill which is home to artists’ studios, businesses, workshops, and performance areas, and it calls itself “a celebration of the unconventional; of radical and subversive thinking.”

The Mill is currently fund-raising to renovate and transform the upper two floors of the building.

There were lots of issues debated. We heard talk of “queering a space”, which didn’t require a permanent building, but, instead, was about creating what the author and essayist Hakim Bey calls “temporary autonomous zones”.

Although the area around Islington Mill, on the border of Salford and Manchester, is fertile ground for creative activity, there’s a persuasive argument that it could be more artistically and socially transformative to create radical spaces in Rochdale and Oldham.

Another questions during the discussion was whether public funding compromises radical creative endeavour.

There’s a small exhibition currently at the John Rylands Library in Manchester focussed on Jeff Nuttall, who was a regular at the Drury Lane Arts Lab and became influential within the ‘underground’ literary scene. I’d recommend the exhibition to anyone interested in unorthodox ideas and the counter-culture.

In the exhibition, there’s a letter Nuttall received from the American poet Douglas Blazek in 1968 in which Blazek talks about his dreams, his ideas, and his need to express them; “My mind flaps like a bird” he says.

I have always liked the phrase Shelagh Delaney used to describe her feelings as a young teenager in Salford in the mid-1950s. She said she felt “tethered like a horse” in a circumscribed world frustrating her urge to break free, to find life.

I don’t know all the motivations of the young people in the audience at Texture but I could sense that same spirit, that mixture of restlessness and resourcefulness, and it would be great if this city could find a way to enable rather than stifle this energy.

I also don’t know the answers to the questions raised the other Saturday, but if there’s anything Manchester and Salford’s radical history tells us – from Peterloo through Engels to Shelagh Delaney and into our current era – it’s that there’s more to life than conforming and consuming.

Our city’s need, now, for critical voices as well as luxury apartments and for radical, as well as retail, spaces.