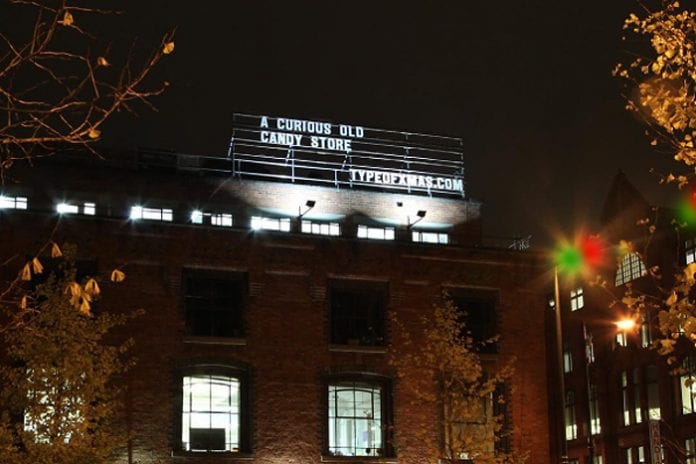 A massive billboard is coming to the Northern Quarter displaying the names of weird and wonderful Christmas gift ideas – and messages – provided by the public.

Every day for 24 days, a gift or message will be chosen at random – and top Manchester artists, including the likes of Stanley Chow and Kim Thompson, will be on hand to illustrate their interpretation.  Photographs of this artistic effort will be taken and posted online, creating a campaign which could travel round the world faster than Santa and his sleigh.

During the installation at 24 Lever Street there will also be a big Christmas tree on display there – where people are encouraged to donate gifts which will be passed on to Wood Street Mission – a charity running in Manchester since the 1870s, supporting families facing hard times. Their festive project called Christmas Should Be More Than Survival sends clothes and food to those locally who need it most – and extra recognition will help them even more.

This is a tradition of festive goodwill in Manchester. For a number of years, resident organisations at 24 Lever Street have been taking it in turn to reveal creative showpieces in support of charity at Christmas. Last year, True North turned the side of the building into a unique advent calendar.

This year’s billboard concept comes from local-based agency The Neighbourhood, who will be giving a gift to the appeal every day and encouraging local businesses and residents to do the same.

Standing at an impressive 18m high above Stevenson Square, the billboard is bringing brightness and brilliant Christmas concepts to the Northern Quarter. Already the public have been inputting their ideas, according to The Neighbourhood’s creative director Jon Humphreys:

“Typeofxmas.com has already been inundated with hundreds of hugely inventive suggestions, ranging from pet unicorns to marriage proposals, so it’s possible some may be more achievable than others.

“Our main aim is to creatively connect with community, whilst helping to make Christmas a little brighter for some of the families in Manchester that are most in need, so we’re looking forward to meeting new friends and neighbours as they come in to donate.”

The typeofxmas.com campaign is running until 24 December.