Disappearing Dining Club Puts Its Cards On The Table

Disappearing Dining Club made its Manchester debut on a dark Mancunian night... 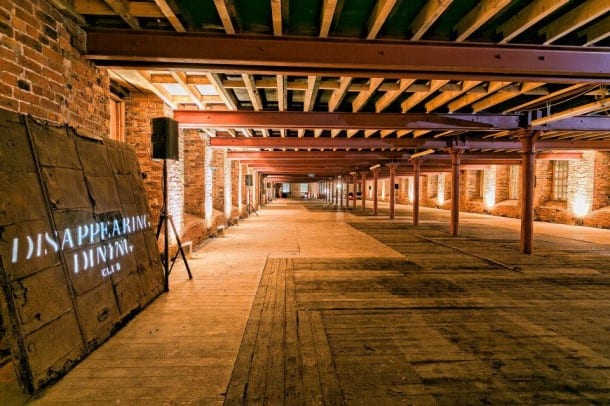 Disappearing Dining Club made its Manchester debut on a dark, dank Mancunian Thursday night with a stylish launch.

Launched in 2010 by Stuart Langley after 15 years of running bars, restaurants and members’ clubs in London, Melbourne & Ibiza, he was joined in 2011 by Head Chef Fredrik Bolin (Zafferano/Glasshouse/Ulrikas NYC) and the dynamic duo with their team of willing accomplices transformed Murray’s Mill in Ancoats for this first outing.

“.walk through a cavernous candle-lit anti-room which was deserted to the main dining area, greeted by a cocktail, ambient DJs and a throng of beautiful people.”

At £46 a pop, it’s not just the food you’re paying for (which was good in a Sunday lunch kind of way) but the whole experience.

Rupert, The Gay, Ginger and I, once we had found the Mill, were delighted to walk through a cavernous candle-lit anti-room which was deserted to the main dining area, greeted by a cocktail, ambient DJs and a throng of beautiful people.

The dining area was two huge long tables, beggar’s banquet style, and you basically have to bag a seat and mix with everyone. We were guided by The Bear’s boarding-school experience so chose an end section (apparently if you sit in the middle you have to serve everyone, which is bad) and we’re joined by a host of lovely people.

You have to buy your drinks after the welcome cocktail and there is a bar as well as table service. I wondered if this was the sting in the tail, but in fact they were reasonably priced with a Prosecco at £6 a glass or a bottle for £30, wine etc is obvs less.

After appetisers of cauliflower cheese soup with truffle oil, potted duck and curried crab, it was salmon four ways, served efficiently and friendly in a ‘cool’ way. This was good but the food is only part of  DDC. The ambience, mucking in with everyone and a unique experience is what it’s really all about.

Murray’s Mills (this is how they spell it so I’m presuming it’s right), is a fantastic venue and you actually just want to buy it. It’s vast, with what appears to be acres of gorgeous exposed brick- work, huge high ceilings with its stunning Victorian interior and outside there’s a canal, adding to the atmosphere.

The main dish was roasted lamb or as they called it ‘braised lamb shoulder boulangere’ which came with a snail jus. It’s served on platters that you divvy up and there was plenty for everyone. I enjoyed it. Cooked as it was in various hues of pink and the jus (though I hadn’t realised it was snail-infused) was rich and, well, juicy.

Pudding was boozy Autumn fruits which is not my favourite thing – I’m not really into cooked fruit. But my fellow diners tucked into it with gusto.

Overall all, DDC charmed me, although I heard some grumblings about the food from others who felt it was a little lacking for the price. For me though, as I said earlier, look at DDC as a full experience and one that you should at least try once.

There are two other DDC at the mill this side of Christmas (Thursdays November 28th and December 12th), with further dates being announced for 2014.

The menus will change for each dinner party, and will be advertised on the DDC website in the run up to each night.

Contact them, that’s all you can do, really, because you won’t find them.