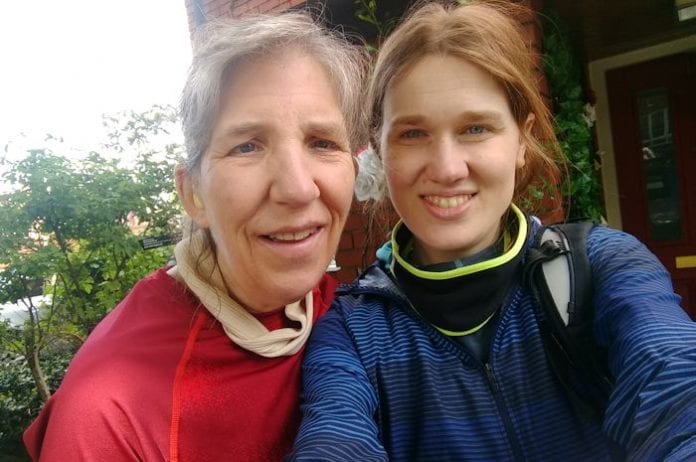 Running your first Great Manchester Run is scary enough. The noise of the crowd, jostling of the other runners, the nerves. Then there’s the weather. Well, this is Manchester.

But Helen Browne has an extra challenge or two. She is deafblind.

Helen has Usher Syndrome, which affects both her sight and her hearing. She wears a hearing aid in her right ear, and has a cochlear implant in her left ear, without which she would have no hearing at all. Her sight is impaired, too, so on Sunday she’ll be taking part in her first Great Manchester Run with Alice Nicolay as her guide to help her around the course.

I met Helen, Alice, and Tess Ptonka, Manchester’s England Athletics guide running tutor, to find out how Helen started running, her training, and their hopes for the big day itself.

It all began with Tess.

“About three years ago, I was working for England Athletics and as part of my job I did a course on guide running. For some reason, I really enjoyed it, really got into it. I learned more about it and became the tutor for guide running in Manchester. Helen heard about the guide running opportunities, got in touch with me, and we met at Helen’s local park.

“I remember we went for a little walk, sat on a bench, chatted and I mentioned to Helen about Parkrun – I was already involved with Parkrun at Stretford – and suggested we give it a try. I had my work laptop with me, so I signed Helen up there and then, in the park, to make sure she couldn’t change her mind!

“We walked at first, we didn’t even finish the full 5km route the first couple of times, then it moved to walking, jogging, walking – where we are now. We’ve fallen over a few times, survived, and now Helen is doing the 10km run with Alice on Sunday. That’s amazing.”

That was only the beginning.

“I was guiding Helen solely for nearly a year, but now we’ve built up a great team at Stretford Parkrun, so Helen gets to meet and gets to be guided by different people every week. It gives us flexibility, but also means Helen gets to run with different people, and the social aspect of it has been really important.

“There’s a guide runner database set up with British Blind Sport and England Athletics, so anyone who has done the guide runner course will be listed and anyone who is visually impaired who wishes to run can find a guide local to them here. It doesn’t just have to be going out to do Parkrun. It can be going for a guided walk, or a jog around a local park, there are people available to help them do that.

Alice became involved when she bumped into Tess and Helen on one of their first guided runs at Parkrun Stretford whilst waiting for her boyfriend.

“It sounded interesting, and as running’s been really good for me, it felt like a way I could share that. Helen has become a running buddy – she very kindly thanks us after every run, but it’s an amazing thing to be able to share. I’m just meeting Helen to go for a run.”

So the step from 5km to the big race – where did that come from?

Helen lays the blame firmly on Alice. “I’ve been doing Parkrun for about three years. I met Alice fairly recently, and after one of the first runs that we did together, Alice said ‘why don’t we do the Manchester 10km?’ – and that was it really.

“Running has been such a big part of my life for so long. I was guided by dogs before and now I’ve moved onto people. It’s all about trust. Trust in the person guiding you and trust in yourself. It’s a big part of my freedom, and I’m very grateful for it. Without guiding, my life would be very different.”

Helen’s training plan hasn’t all been running, as Alice explains.

“We’ve kept up with the normal 5km runs, but Helen has been out doing lots of extra training. She has a personal trainer, and goes to the gym twice a week. Then recently, because going from 5km to 10km is such a big jump, we’ve been out to do some longer runs. So we’ve done a four mile run and a five mile, and Helen coped really well, and even wanted to go faster!”

Finally, I had to ask what they are most looking forward to on Sunday?

For Helen it’s all about the experience. “I just can’t imagine it. I’m told there will be one or two people there. It’s going to be fantastic just being there.”

And Alice? “I’m really looking forward to crossing the finish line with Helen. It’s always a special feeling crossing the line for yourself, but crossing it with Helen is going to be something else.”

Helen is raising money for Deafblind UK. She and Alice will be starting their race at 12.30pm ahead of the Elite Women runners. You can donate to her fundraising page here.

Finally, if you’re a visually impaired runner or would like to become a guide, you can find out more here. 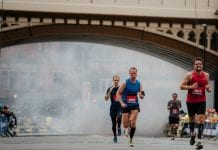 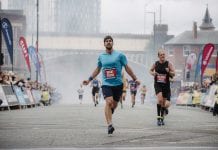 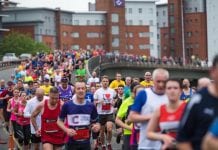