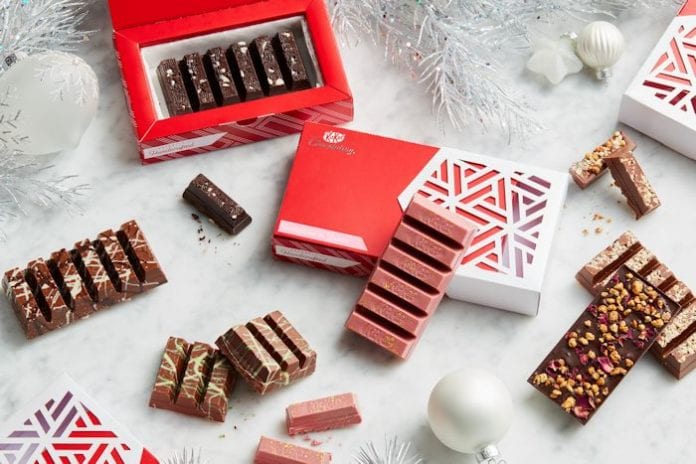 It’s the time of year when our thoughts turn to Christmas and the search for presents and stocking fillers which are a little bit different.

Last week, John Lewis announced they would be opening a Quality Street pick and mix pop-up at their Trafford Centre store for the festive season.

If Quality Street aren’t your thing but you’re a fan of KitKats or you know someone who is, you might want to pop down there anyway, because it’s the only place outside London where you will be able to buy new, luxury KitKats handmade by Nestle chocolatiers in store.

The bars, which are exclusive to John Lewis & Partners, come in seven flavours inspired by popular British desserts and other classic British flavours. They are cherry bakewell, marmalade, apple and rhubarb crumble, Earl Grey, blackberry and elderflower, lemon posset and Manchester favourite dandelion and burdock.

Customers will be able to make up gift boxes of their favourites from the seven bars and have it personalised with a message etched by laser.

The pop-up will also sell six handcrafted Special Edition flavoured bars – Nuttlylicious, Zingtastic Gin and Tonic, Billionaire’s Treasure, Jewels of the East, Springtime in Japan, Whisky and Ginger, all of which will also be available at the shop and on johnlewis.com.

The KitKat Best of British personalised gift box (8 fingers) costs £12 and the Special Editions Bars cost £7.50 for 6 fingers and £12 for 12 fingers.

The KitKat pop-up opens in the John Lewis store on October 1st.

If you want something more exotic, you’ll probably have to go to Japan, where KitKat is considered lucky because it sounds like Kitto Katsu, which means ‘good luck’. Since the turn of the millennium, KitKats have been available there in more than 300 weird and wonderful flavours including baked potato, green tea, pumpkin and cherry blossom (the flower, not the shoe polish). Sayonara.