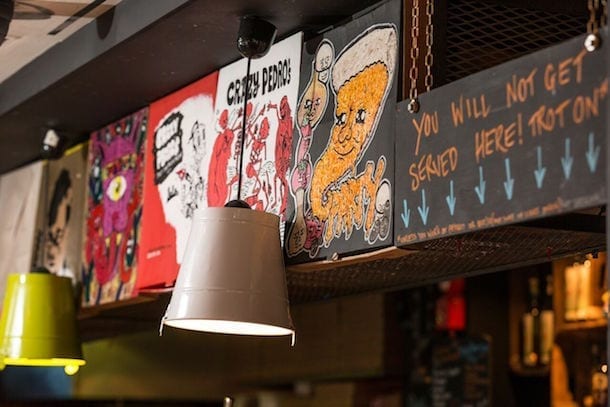 The popular pizza hang-out has enlisted the help of local artists to put their artistic stamp on their pizza boxes – all in the name of charity.

The boxes are on display at the venue until 6th April when they will be auctioned off for The Christie at a special event.

“A pizza parlour might not be the most obvious place you’d expect to see art handing from the wall but at Crazy Pedro’s we like to do things differently,” says Crazy Pedro’s founder, Lyndon Higginson.

“We’ve got some great artists on board and we’re hoping the pieces will raise lots of money for The Christie. To get a pizza the action be sure to come down on the 6th!”

Amongst the pieces submitted you’ll find a Tony Wilson-inspired gem by Northern Quarter street artist Stewy and an eye-catching Mancsy original adorned with a giant bee as standard.

“I’ve been asked to do some unusual things,” says Mancsy, “but never to customise a pizza box! The Christie is my nominated charity so I jumped at the chance to take part in Crazy Pedro’s Pizza Box Project. I usually make editions of prints so I hope this one-off piece will attract a few bids and raise money for The Christie.”

The boxes will be auctioned on 6th April at 6pm. To attend please email crazypedros@downatthesocial.co.uk

Due to the project’s popularity, Crazy Pedro’s has decided to host regular charity auctions, with all money raised going to a different nominated charity each month. Local artists can show their support by grabbing a box from the venue and putting their unique stamp on it. On returning their masterpiece they’ll be rewarded with a pizza and beer for their efforts.