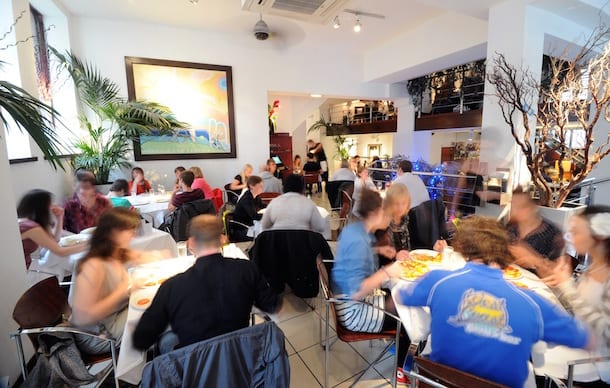 Award-winning Manchester-based restaurant group Croma has sealed a deal with Odeon Cinemas to trial an innovative ‘pizza-at-the-movies’ offer at the Trafford Centre.

The Odeon partnership, called Croma Pizzapoint, will be launched at the Trafford Centre for the premiere of the new blockbuster Star Wars movie The Force Awakens on 17th December.

The concept – freshly baked pizza, each one made to order – is a unique product designed for audiences watching a film and will be rolled out to more Odeons throughout the UK.

Croma was formed by Andrew Bullock and Bob Dunn after the pair left their Pizza Express franchise in South King Street in 2000. Under their management, they turned it into the highest-grossing Pizza Express in the UK, setting unbroken records for customer numbers across the national chain.

All Croma shareholder managers including Michael Baker (Manchester and Didsbury) and Kirsty Marshall (Chorlton and Prestwich) previously worked with Andrew and Bob at Pizza Express in South King Street.

Croma has been voted most family friendly restaurant at the Manchester Food & Drink Awards three years running and is in the Trip Advisor Excellence ‘Hall of Fame’ with consistently good reviews for 5 years running.

It has just been named by the Sunday Times in its UK dining out guide as one of the top 10 best value restaurants in the North West.

The partnership comes as the group celebrates the 15th anniversary this November of its first restaurant on Clarence Street in the city centre and the 10th anniversary of its Chorlton venue.

Along with eateries in Prestwich and Didsbury, the group, which enjoys gross income in excess of £5m pa, includes three 100-seat franchises at Odeon cinemas in Tunbridge Wells, Edinburgh and Loughborough.