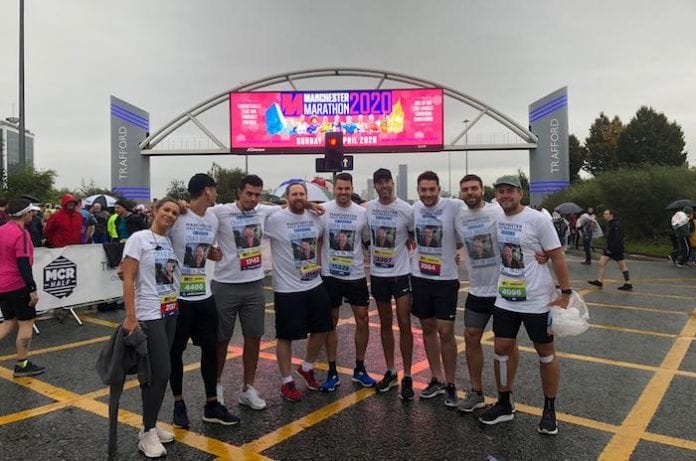 It has been eight months since the sudden death of popular Manchester socialite Craig Bieszke, but his identical twin brother Chris continues to keep his memory alive.

Chris and a team of friends were out in the pouring rain on Sunday running the Wiggle Manchester Half Marathon today in memory of model and club promoter Craig, who died suddenly in March aged 35.

And there was double the reason to run the 13 miles for Chris – who is raising funds for the Alzheimer’s Society on behalf of the twins’ beloved mum Annie who passed away from the disease in 2012.  They’ve already raised over £5,000, with donations continuing to pour in as they take part in the run today.

Chris said: “We’re running in memory of Craig, and to raise money for the Alzheimer’s Society for our mum.  She developed early onset Alzheimer’s at the age of 50, and me, Craig and my dad cared for the whole time at home until she died at the age of 64.

“Everyone has been so generous it’s been lovely.”

And Chris managed to complete the half marathon on Sunday afternoon in an impressive time of 2 hours and 11 minutes.

Over 1,000 people attended Craig’s memorial service at Gorton Monastery in April, with a huge outpouring of grief from his many friend’s from Manchester’s social and showbiz scene.

Chris said: “I can’t even describe that day, we wanted it to be the perfect tribute to Craig really and I think we did that.

“But it still doesn’t feel real, I’m still trying to get my head around the fact he’s gone.”

Chris is still hoping to create a lasting legacy or charity in Craig’s name.  “It’s affected so many people, because everyone loved Craig.  There was such a huge outpouring it would be nice to create something from that, but at the moment it’s still very raw.”

Craig and Chris both took part in the Memory Walk in aid of the Alzheimer’s Society in memory of their mum a couple of years ago, but this is the first time Chris has done a half marathon.

So what does Chris think Craig would think of it all?

He smiled: “I think he’d think we were mad!  But I hope he’d be proud of us and looking down on us during the run.”