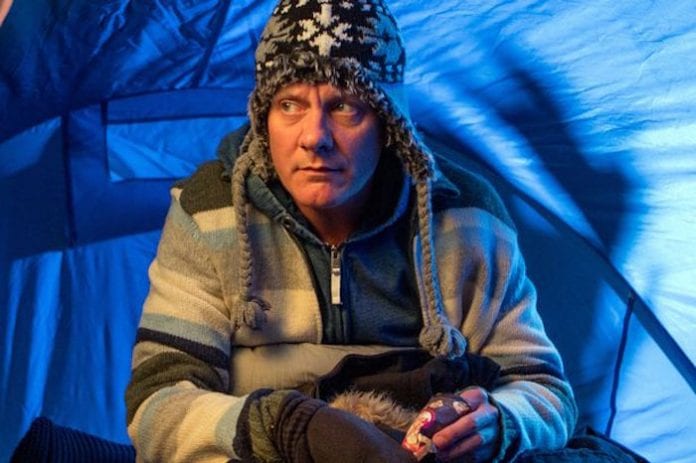 According to the Office of National Statistics, there were 4,751 rough sleepers in England in 2017 – the highest figure since records began. Of those, 94 are rough sleepers around Greater Manchester – a huge increase from the 27 recorded in 2012.

Actual figures are expected to be much higher. And that’s without including Manchester’s hidden homeless – the sofa surfers who haven’t got a place to call home and go from friend to friend relying on favours to keep a roof over their heads.

Never afraid to shy away from a difficult storyline, Coronation Street is doing what it does best by highlighting just how easily anyone can find themselves sleeping rough.

Earlier this month, viewers watched regular Sean Tully (Antony Cotton) lose his job at the Rovers Return after he was caught stealing booze from the pub. And over the past few weeks, an emotional Sean has demonstrated just how easily someone can find themselves in dire circumstances.

On a downward spiral after losing his job, Sean had to move out of where he was living and found himself sleeping in a tent in a local park. Taken under the wing of a fellow rough sleeper, an emotional Sean was welcomed into a homeless community after being mugged while living on the streets.

Handling the story with honesty and compassion, the soap showcased the side of homelessness that most aren’t familiar with. We are introduced to members of a homeless community that Sean has found himself part of and, to some people’s surprise, they are shown taking care of one another.

In heart-breaking scenes that aired last night, Sean and his homeless friend Carol discussed what Sean can do to earn some money while he tries to find a new job.

“What am I going to do in the meantime? I can’t beg,” says Sean, to which Carol replies: “I hate that word. You’re just asking for help – you’re not forcing people to give.”

The scenes touched the heart of the nation as we watched a very emotional and embarrassed Sean sat outside a local supermarket relying on the kindness of strangers to give him spare change.

In a matter of weeks, Sean has gone from working at the Rovers with a roof over his head, to becoming jobless and sleeping in a tent – demonstrating how we’re all only a few pay-slips away from homelessness.