Burger or lobster? Both. 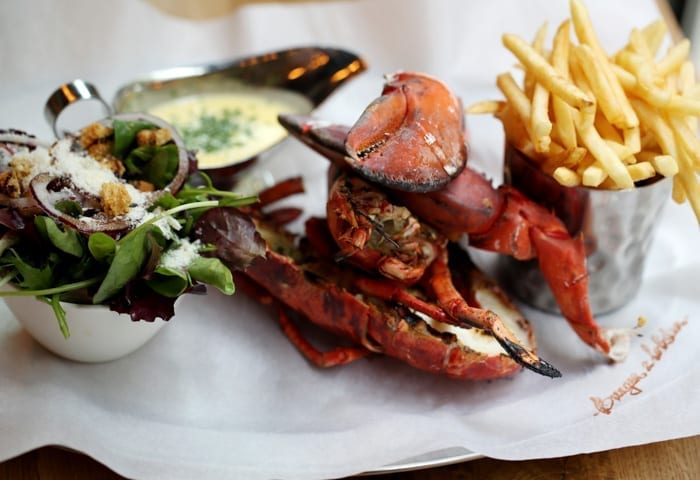 The Manchester restaurant boom shows no signs of abating with Burger & Lobster set to open the doors of its new 200 cover King Street eaterie on Friday 7th August.

Being spoilt for choice at Burger & Lobster shouldn’t be a problem because the concept is simple. There are no menus. They just serve burger or lobster.

Choose from a 10oz burger, whole lobster or lobster roll, served with chips & fresh salad, all priced at £20. Also available are big boys or jumbo lobsters, which are sold by weight and are perfect for sharing.

The lunch menu offers more of the same but in smaller portions- a 6oz baby burger or one of the smaller lobsters with one side for just £12.

All the burgers are made using corn-fed Nebraskan beef using three cuts of prime steak containing natural marbling for the juiciest flavour. The wild lobster are flown in live from the Atlantic Ocean to Heathrow Airport and delivered daily to restaurants where they are kept for you to pick your own.

Upstairs there will be a slick and sexy 30 cover cocktail bar, serving up a range of signature drinks designed for the people of Manchester with beers supplied by a number of local brewers including Runaway and Seven Brothers.

The Manchester restaurant will be the twelfth in the brand’s portfolio, following the likes of London, Cardiff, New York and Stockholm.

Apparently, one of the owners of Goodman steak restaurants – in Maddox Street, Old Jewry and South Quay, Canary Wharf – wanted their next project to be a burger bar. One of his cohorts suggested a lobster restaurant modelled on those in the US, where the big bugs are not considered such a big deal. The outcome is Burger & Lobster, which launched in mid-December in what was The Field pub in the heart of Mayfair.

Burger & Lobster want to give you the chance to get your claws into some proper grub ahead of the official opening. They are now taking reservations for a series of preview lunches and dinner trials which is running from August 4th-6th. The food is free. You just pay for the drinks.

So if you want to see what all the fuss is about and fancy some free grub, book tickets for their free dry run here: burgerandlobsteropeningmcr.com/book