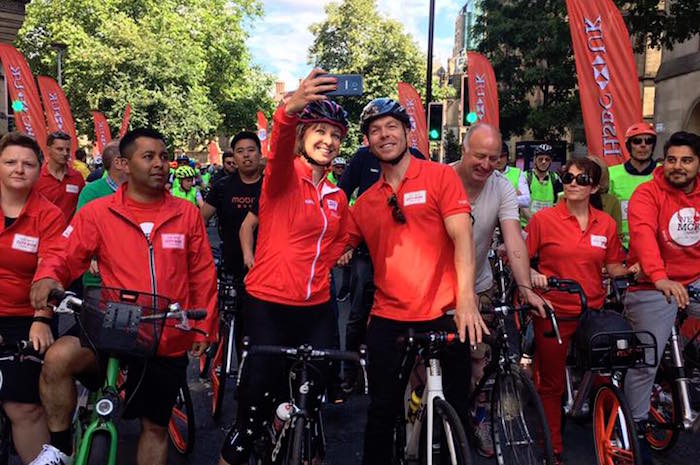 It’s a sunny Sunday in the city centre and it’s oddly quiet. Eerily so. The birds are singing and the trams are rattling in the background.

You finally figure out what it is that’s missing. There are no cars.

No thrum of engines, no squeak of a less than shiny new bus, no grumpy horns beeping as their owners impatiently wait for someone to move in front of them. Instead, if you listen carefully, there’s the ring of a bell, the squeak of a shiny new frame and the crinkle of a neon City Ride bib, fresh from its wrapper.

Because last Sunday, Manchester closed its streets for the annual HSBC City Ride (previously known as the Sky Ride).

Event partners British Cycling are keen to get us all on two wheels and the council is trying to make the city more bike-friendly with initiatives like its collaboration with Mobike and the redevelopment of Oxford Road. 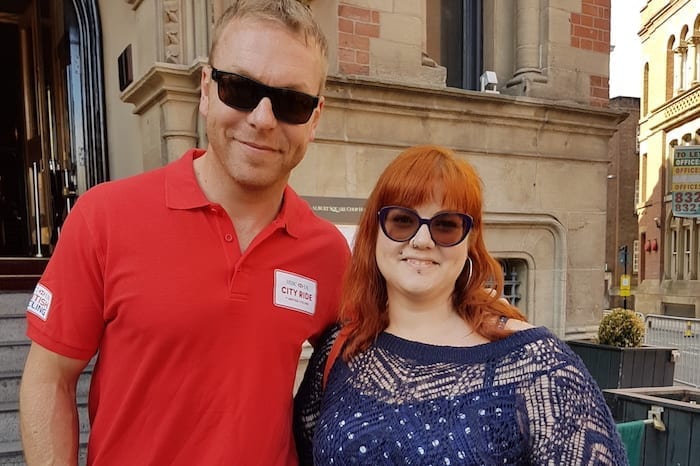 The result? 11 kilometres of clear streets so new riders – and experienced ones – could explore the city unhampered by four-wheeled vehicles.

For a non-cyclist like me – although I am married to one – it’s an opportunity to feel a little jealous and recall the rusty, second hand number you have languishing in pieces in the shed.

In town for the event were two ambassadors for the sport – Olympic cyclists Sir Chris Hoy and Joanna Roswell-Shand. I was there to chat to them about it.

Isn’t it a nice day for it Chris?

I was bracing myself for a bit of rain today. I’ve been living here for a couple of years now so I know what to expect.

What’s so special about City Ride?

Normally when you’re around the city centre, it’s the middle of the day, you’re in the city centre, you’re dashing to get somewhere. But today you can just sit on your bike, soak up the atmosphere, the architecture, the sunshine. It’s a real novelty for me to be able to enjoy being in the city centre and not dashing from A to B.

It’s easy to forget just how much fun it is to ride a bike. Today is as much about adults as it is about kids. It’s about falling in love with the bike again. Once you get out there, and you don’t have the pressure of traffic and there’s none of the hustle and bustle around you, that’s when you go ‘yeah, this is a lot of fun’.

What do you hope to get of it?

Any time at all in the saddle is beneficial because I’m trying to cycle to the South Pole and it’s going to be 12 hours of cycling a day for about a week out there. The temperature is a bit warmer here obviously, but I’m just trying to build up the number of hours a day on the bike, so by the end of January I’ll be ready for it.

It’s going to be a real endurance test because I’m not an endurance athlete. My whole career has centred around doing ten second to 20 minute bursts of effort.

Genetically, you have a certain percentage of slow twitch and fast twitch muscle fibres, you’re born a certain way and that’s why some people are better at throwing, jumping and short stints as opposed to those who do long stamina tests.

For me it much goes against my genetics. I’m a sprinter not an endurance athlete. It’s a very different challenge, but I think that’s what appeals. I’m not in my comfort zone. It’s not something you’d expect me to do.

How do you motivate yourself when you ride?

I like to ride a bike and I like to be active but I enjoy having a purpose for it each day. So if I’m going to the gym or riding a bike, I like having a focus to help me get through that.

There’s a bit in every ride, in every gym session, where you think ‘this is getting pretty tough now, I could probably just knock that on the head, that was enough, I’ve done a fair bit today’ but if you’ve got a purpose for why you’re doing it, then you say ‘no, I’ve got to finish this, I’ve got a planned session, I’ve got to keep pushing on’, and it gives you something to motivate yourself.

It doesn’t matter what it’s for. Like today, if you’re a first timer, people on their bikes for the first time, just completing one lap could be a challenge. If you have a challenge, if you set yourself that challenge, it’s about trying to achieve it, it’s about bettering yourself.

Why is cycling becoming so popular?

It’s great to see so many people are inspired to do charity rides, to raise money for amazing causes. It used to be the marathon was the big thing. Now there’s Land’s End to John O’Groats, or London to Paris, or Ride London or even today, so it’s great to see cycling is becoming an activity of choice.

It’s not all about having success at the highest level but keeping it in the public eye. Having success in the Olympic Games, in the Tour de France, in the World Championships, it keeps the public aware. 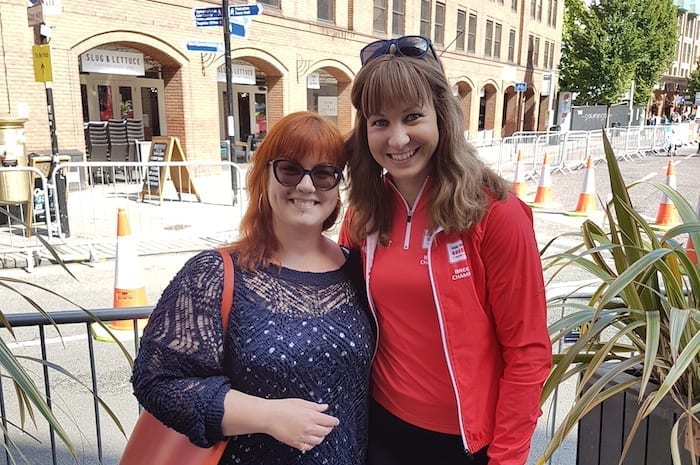 While Chris is planning his latest physical challenge, Joanna Roswell-Shand retired in March  and, as well as promoting cycling, is planning a new path for herself.

I’m seeing many families at these sorts of events, so families with kids, but also grandparents come out with grandchildren and I’ve also seen some younger guys just turn up and fancy a ride around on traffic-free roads.

What are you up to at the moment?

I’ve done a ride leader qualification so I’m a Breeze Champion and I’ve been leading local rides where I live in Cheshire. I’ve done a bit of media work around cycling events, a bit of public speaking – going into schools and doing talks.  And I’ve got a place at Manchester Met in September to do Physiology, so I’m enjoying my summer holiday really. I retired in March so I’ve spent a good few months enjoying being a little bit free, before going back into education in September. It’s a bit scary, but I’m looking forward to it.

The subject is something that I’m really interested in. Having looked at so many degree options, it was difficult to narrow it down to what I actually wanted to apply for because there were almost too many. It could equally lead to something more healthcare-based as well as elite sports, so I’m not quite sure where I’m going at the moment. I always wanted to go to uni after I did my A Levels, but I moved into cycling, so it’ll be a nice transition to make from elite athlete into a new lifestyle.

How will it feel to be much older than your fellow students?

I feel like an eighteen year old right now. I left school at eighteen, relocated to Manchester, I’ve been a full time cyclist for just over ten years, and that was great, but you don’t get the freedom that you get as an eighteen year old when you leave home. You’ve got a training plan and a coach, and you train every day, it’s a very regimented lifestyle. I’ll be ten years older than the other eighteen year olds at uni but that’s how I’m feeling at the moment.

How have you been keeping fit?

I have been trying to keep a bit of fitness but it’s very different when it’s your job and the choice is taken away. Now if I want to go out on my bike I will. If it’s raining and I don’t fancy it, I won’t and I can go and do something else instead. Before, going swimming was a bit of a no-no because of the risk of germs in the swimming pool. But I’ve been enjoying doing that sort of thing as and when I want to. It’s been a nice sort of lifestyle so far.

For a nervous newbie cyclist like me, standing in Albert Square, surrounded by bikes of all shapes and sizes – riders of all ages and physicalities – it’s a little hard not to think about digging in the back of the shed for that old bike.

Maybe, just maybe, I’ll make a cyclist of myself yet.